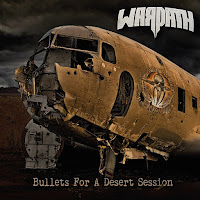 Several years ago I did a sweeping review project covering all the German thrash I could find, partly to track it across the decades as one of my favorite scenes in the subgenre's history. Warpath is a band I was not particularly kind towards, an average at best analog to the 90s wave of American groove metal pundits who contributed greatly to the depreciation of the style, but which managed not to succumb entirely to the lure of nu-metal. They still left on a sour note, even by their standards, with 1996's Kill Your Enemy, but when I saw that they had reformed after 20 years of inactivity and gotten a new deal through Massacre, with several new members, I was curious whether they would be barking up the same tree, or perhaps benefit from all that added experience and listening that the decades might bring to their core style, and while I can't say that they've improved a great deal from their initial run, Bullets for a Desert Session is without question a near equal to their 'better' works.

That's not saying much. Sure. This is still the meaty, straightforward thrash metal you might have remembered them for in the 90s, but perhaps the gulf of time makes it a little more tolerable, or that they've just written material which is slightly more appealing to the ear. When I hear the gruff vocals and creatively deficient riff-set here, I'm reminded a lot of those years when Sacred Reich dropped the ball on their later albums, or perhaps a little Machine Head or Exhorder (bands I'm not terribly fond of). Nuance and variation takes a backseat to chugging and muscle, with a limited array of chords to balance it out, so the only elevation real here comes from a chorus like "I Don't Care", where the guitars slide up a little higher from the palm mutes to provide an almost punk flavor to contrast against the mad dog vocals. If you're just out for a stroll through the mosh pit and jonesing for records like the legendary Speak English or Die from S.O.D., then you're probably the target for a record like this, only it's even slower and more simple in some aspects than you might even expect for baseline testosterone thrash from those Golden Ages.

The mix here is really dense and potent, that I have no issue with. The bass tone is nice and fat, and vocalist Dirk Weiss definitely sounds like he can put back a few pints, with a grating, angry sustain, but beyond production values there was just too little to appeal to me. The formulas employed in the songwriting seem a little too safe, bouncy and dated, with even the gang shouts forecast from a mile away. Within those parameters, though, Warpath still has an ability to come off as slightly catchy and charismatic for such crude, pummeling music. But it's just too easy to pinpoint where a band like this couldn't break through where countrymen like Kreator, Tankard and Destruction excelled...the level of musicianship here is simply child's play by comparison, a couple of chords that don't sound like they took much effort in creating. And, look, that's probably the modus operandi here. These guys wanted to put together some bulldozer metal and bang some heads with a crowd while pitching back some beers...it's just unfortunate that so many others do it so much better. Bullets for a Desert Session is a textbook 'loyal to a fault' comeback album. If you were into their older stuff, then it is probably not a terrible listen, but not only has thrash moved on from this dingy period, it was already significantly better even 7-8 years before the band originally dropped their debut.