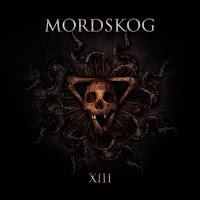 Mordskog sets up its debut full-length XIII quite well, with a haunting, writhing acoustic piece that instantly manifests a dark, unhinged mood through both its vocal narration and accompanying whispers you can hear right at the edge of perception, while a deeper drum beats up a clamor in the background. This isn't the only ritualistic piece on the entire album, and similar aesthetics pervade even some of the more straightforward tracks, but as so often happens with bookend intros and outros, it created an aura of mysticism and the occult which can't quite be captured in the pure black metal that dominates the rest of the disc. To that extent, I suppose I could only have emerged a little disappointed with the rest of the material...

But not because the Mexican trio is incompetent by any means at summoning up vile tremolo picked patterns that straddle the border between black and death metal, or the steady lava floes of hellish chords that seem drawn directly from the roots of the genre, when simpler patterns slathered in rasping vocals were what reigned, and not attempts at orchestration or complexity. At its heart, XIII is a paean to when the style felt  at underground, with a few slivers of novelty in how they'll carve out the cleaner or chant-like vocal lines and aforementioned atmospherics against the grating rhythm guitars. There is a bit of variation in the picking style, for instance in "Aequo Pulsat Pede" a couple of their winding melodic patterns were redolent of old Rotting Christ, and other parts reminiscent of the mood and primacy of vintage Samael. But if were straight down to the riffs, they don't really have a ton to offer that feel fresh or memorable, so you really have to focus in on those little bass grooves, or the wealth of different vocals, or just the overall evil shadow they collectively cast, to find yourself truly absorbed.

Mordskog are no rank amateurs, and several of them have played live or in studio with other bands from Hacavitz to Endstille to Vital Remains, and so there's definitely a level of confidence and maturity in how they put these tracks together which serves to overcome the predictability I felt for some of the playing. The production is clear but moody, with some real solid drumming and a good balance between all the instruments, which in turn doesn't manage to obfuscate the varied vocal tricks and chants they employ throughout the album. They also fill out their songs with just enough of a shift in tempo and riff construction so that they never fall into the trap of dull repetition; and just as they begun the effort with an intriguing opener, they end with a clanging industrial/noise piece which also kind of takes you by surprise. Definitely not a bad listen here, but I'd like to hear them go a little further outside the norm with the riffs themselves.