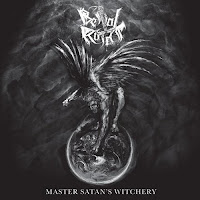 Both the band's name and the album title are pretty apt to tell you what this going to sound like: raw and warlike blackened death metal which is the perfect fit for the Nuclear War Now! imprint upon which it's been released. Master Satan's Witchery sounds like someone took a number of primal extreme metal merchants like Hellhammer, Sarcofago, (old) Sodom and Blasphemy, melted down their essences, stirred them into a cauldron until they had been reduced to an essential, evil oil or ichor, and then corpse painted themselves with the resulting Satan-stuff before taking up rusted axes, spiked gauntlets and armbands, and squeezing themselves into leather and combat boots, with the open exposure of chest hair optional. Now, that sounds pretty goddamn awesome, I will admit...

And on SOME level, Bestial Raids is pretty awesome. They are raw as the fucks they do not give, and this attitude saturates their pounding, grinding, wrenching compositions as if they were rags soaked with blood and vomit. Liberal with the feedback, slathering the rhythm guitars in a tone that will literally churn your stomach, and powered by a percussion section that sounds like a bunch of hard objects being shoved through a lot of mouths full of teeth. They almost sound like a more uppity version of a band like Teitanblood, though a little more punkish in nature and not so absolute in the level of caustic emptiness that their music manifests. But yes, somewhere between those Spaniards' sense of nihilistic tone and the normal goat- or war-metal fixtures you'll find on the rest of the Nuclear War Now! roster or Hell's Headbangers, Masters Satan's Witchery delivers a firebrand of ugliness and punishment which is undoubtedly going to find some audience which deliberately seeks out that sense of infernal truth, blasting and broiling clamor and chaos.

Now, occasionally I would count myself among that audience, but not so much here, because for all its vile aesthetic primacy, this record just falls short for me when it comes to creating memorable riffs of any sort. They feel like half-formed things writhing in the murk of the distortion, and while that is indeed the modus operandi behind records like this, it just didn't last beyond the mandatory spins I take through a review title. The snarls and barked out vocals are fitting, the energy on all out assaults like "Angel of the Abyss" is one that I can appreciate, and Bestial Raids do live up to the task of creating a propulsive paean to the first wave abominations that influenced them, but I just feel at this point like I've heard too many of these sorts of records, that I can't normally be inspired by the raunchy atmosphere and instinctual savagery alone, that they require something a little extra, and Master Satan's Witchery didn't quite have it. But, there are certainly folks out there who are going to get a lot more from this than I did, so if you're into bands like Black Witchery, Proclamation or the unholy Canadian trio of Blasphemy, Conqueror and Revenge, have at it.