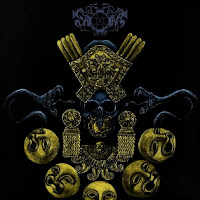 I was interested in Saqra's Cult for two reasons. Firstly, both of its cultists were also present in a blackened thrash act Maleficence which release an EP last year that I covered. Secondly, and perhaps the more important, this was purportedly a band themed around the Inca Empire. While that might not be a completely novel theme, at least a few Central American bands closer to home having delved into it, I'm not sure I've really heard it implemented in a way that satisfied me as some sort of ethnic, atavistic manifestation of the subject matter into the metal medium. Granted, these guys are from Belgium, but hell, Nile are from the USA and they have well developed their Egyptology into extremity by this point, so I don't really think your entire band has to hail from a particular region or culture to experiment with its history as a musical outlet.

Now, after listening to Forgotten Rites a few time, I'm still not too sure that I've gotten the 'Incan Fix' that I seek. Certainly this album looks beautiful with its gold and dark contrasted artwork, but apart from a few tribal ambient pulses like the intro to opener "Solemn Sacrifice", it's a rather straightforward mid-to-fast paced black metal effort with some tangible death metal elements as well. That's not to say it's not a solid metal album on its own right, but it functions more along the usual tropes. Rhythmic batteries steeped in double bass drumming and speeds that are often quite tame for the genre. A hybrid of growls and snarls which is not uncommon these days in a lot of French and Belgian. A thick and viscous tone to the rhythm guitars which reminds me of bands like Aosoth or Saligia, rather than the airy and tinny aesthetics present in a lot of pure necro black metal. There's also a fat, ruddy bass tone here which works well to anchor the production and keep the record nasty and beating on you; this is most deliberate in "Mesak" but you can feel it throughout

The riffs have just enough of a tear to them in general to remain engaging, though they only rarely bust out a hook or an individual pattern of notes that really makes me want to go for a double take. A lot of the chord progressions are fairly commonplace and predictable, and while executed effortlessly they don't conjure up enough of the cultural mystique or ancient fear that I would have hoped for. It just seems like it needs a few more unique sequences to break up the bulk of its riffing, especially in a longer (10+ minute) track like "Solemn Sacrifice" which just doesn't have enough interesting content to fill itself. To be fair, the rest of the tracks are considerable shorter, but even then there were parts that I didn't feel terribly inspired with. The limit here is that the themes are delivered to you too much through the lyrics and your own imagination, rather than what you actually hear on the disc. That said, it still feels suitably ritualistic and dingy enough to transport you somewhere, to some fallen, shadowy space, and there is firm groundwork here which could be engineered into a more fulfilling escape into the annals of myth and history. One to watch.