Shaarimoth - Temple of the Adversial Fire (2017) 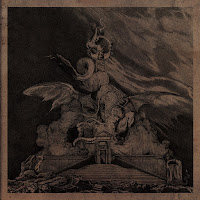 Norway remains slightly underrepresented in the death metal scene, but there have certainly been a number of excellent contributions through the years, from the Darkthrone debut Soulside Journey, through the turbulent stylings of Molested's Blod-draum,  towards the constant shifting and compelling morbid landscapes that make up Obliteration. As with a number of their peers, the members of Shaarimoth hail from the better known of their nation's metal exports genres, comprised of former or current members of Disiplin and Gehenna, and thus their background of experimentation and extremity is crucial to rounding out what is, for the most part, a pretty unique angle of approach to how they tackle the deathening.

Temple of the Adversial Fire is structured more like a narrative sequence of dramatic, roiling peaks and valleys than a more consistent or mathematical, riff-based death metal formula. While there are clearly some trace elements of bands like Morbid Angel, especially in the guttural vocals and the oft alien vectors of composition, it seems as if the trio of F, R, and J seem focused more purely on the ritual experience of the record on the whole than on drafting individual riffs to have an audience throwing horns at the ceiling. Clamorous, noisy bursts of double bass drums and eerier, upper range open string pickings are contrasted with layers of chanted and growled vocals, while there is no shortage of the use of ambient effects from bells and other percussion to more horror-like synths and voices. They play a lot with structure on the whole, to the degree that I never felt I could predict what was going to happen at any given moment, and this unbridled level of creativity cultivates from both their black metal backgrounds and the death metal tropes that inspired them.

The record is saturated with strange anthems like "Lord of Putrefaction" which bounces between both death and thrashing sequences, where some of their most memorable and foreign sounding riffs are scrawled upon a Cyclopean, atmospheric canvas, and "Fires of Molok" which is a really interesting piece with great, fat bass lines and fills, and a shuddering, lurching mid-paced tempo that is threaded through with faster guitar sequences that constantly keep the ear engaged. Dissonant explosions of aggression run aground against consonant, glorious melodies for a really interesting balance that maintains a refreshing flavor throughout the entire track list. That's not to say they can't lay on the more purely Morbid Angel or Behemoth-like maneuvers ("Beast of Lawlessness") and inject them with fits of proficient wizardry for the shred-crowd, but no single side of this album overwhelms the other, and that's clearly a veteran touch.

It's all captured in a mix that is both shadowy and punishing, but never excessively polished to the point that it exits its earthen, organic core (which even the cover hints at). The drums are good and loud, perhaps a little more on my speakers than the guitars which are often lighter, but once they tear out into a heavier sequence all the low and high end balance out to put puncture holes in your spirit and I just loved following the various echoed vocal lines as they ricochet off the cavernous upper ranges of the record. In short, this is a pretty excellent sophomore album from a band which does trace some identity to its legendary forebears, but also broadens its own horizons by taking some similar risks to what those influences were often known for. I've been through it about six times already, and I'm still picking up new details, so it's an easy recommend for people into the more atmospheric but energetic old-school fueled sounds that other bands like Heaving Earth and Nader Sadek have tapped into, or perhaps even Behemoth on The Satanist. Awesome stuff.