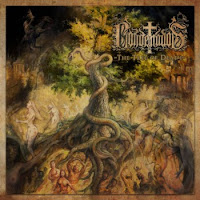 The Gothic doom aesthetic summoned forth by The Tree of Death is not one I commonly come across, so it's usually one I do appreciate to some extent upon exposure. At least, I appreciate that it still does exist and that not every genre adherent has fled to the more funereal death/doom scene, or to all out stoner classification, not that there's anything wrong with those niches, but they just don't really speak to my sense of desolation and helplessness quite as much as the more traditional end of the spectrum. Condenados of Chile clearly trace their aural DNA back to the older Sabbath records, but what ultimately manifests throughout this sophomore effort is something akin got a Solitude Aeternus, or to take it a little further, they're like a South American strain of the style that Candlemass made popular throughout the mid to later 80s and beyond. In fact, there are moments on this record which created a real sense of déjà vu for records like Epicus Doomicus Metallicus or Ancient Dreams.

Not because they copy the Swedens note for note, mind you, but the combination of such assured, mournful and monolithic riffs with the clear attempt at a resonant, operatic vocal style by Fernando Vidal drew me straight back to how impressive that was when I first heard that material from overseas and how well it translated Sabbath's blueprints into a staggering new architecture. Now, I'm not saying Vidal has that power, range or perfect control over such a voice that Messiah Marcolin did, and he's ultimately got a more worklike inflection not unlike Robert Lowe, or John Gallo of Blizaro, but he certainly knows his range and gets as ambitious as possible within it. For the most part, it works rather well, and a few harmonized lines help enrich it, but there are admittedly a few points where it falls a bit flat and uneven. That said, some of the riffing here really compensates, simple and plodding but well thought out to create an atmosphere of weeping statues and old cemeteries during autumn. Just the right balance of melody and crushing weight to the rhythm guitars, and the bass tone throughout the album is also thick, fat, and highly effective, whether rounding out the opening of a tune on it's own or supporting the hunchbacked guitar chord patterns.

It's not always the saddest approach to the style, and they do occasionally sway into some more solid, uppity grooves, even going so far as to burst out into a fast almost doom-core part in the waning minutes of one track, which they then convert back into a slower crawl with bluesy Paradise Lost memories sealing its fate. It's great to have a surprise like that once in awhile, and whatever other atmospheric effects or nuances Condenados employ, as in the intro with its church organs and solemn escalation into metal, they do so pretty well. Do I wish there were more than that? Yeah, and a lot of the time the Chileans are just really straightforward...not all riffs here are created equal, and while performed powerfully they'll lapse form the memory ere long. The first track does also feel over-sized without much of interest to fill it out, but this is the exception to the rule Altogether, The Tree of Death is successful at what it sets out to paint...a melancholic mosaic of sinking spirits, an order of monks cowering from the weight of the Divine, and a tombstone lying on a hill beneath the shifting seasons, your name slowly being etched across its surface.