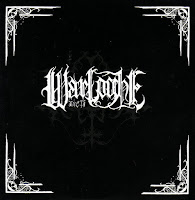 Warloghe has long garnered respect as an infrequent, raw, and wholly vile entity on the Finnish black metal circuit, with an unbent and uncaring attitude manifest through raw production and evil composition which could make some Horna records sound like you were sitting by a warm fireplace toasting marshmallows. Womb of Pestilence is probably the better known of their two full-lengths, and going on about 14 years of absence, the group has decided to issue a 7" with material recorded around that period in the earlier oughts, but not previously released. With this and the band's Dark Ages Return compilation last year, it's possible that a lot more interest is being kicked up through the dust of both the band and listeners, so some might look at this as a 'feeler' for what might lurk around the corner...

Lucifer Ascends is pure Warloghe, raw and caustic black metal which is produced with the guitars at a fuzzy distance from the foreground, the drums transformed into a clanging din, the bass lines an unbroken throb of notes that contribute a lot to the music's sense of fell majesty and melancholy. The tempos here shift between desperate, driving moderate blast-beats, prevalent in the titular A-side, to a slower and more glorious warrior march that dominates "In Hunger And Thirst", which I happen to find the stronger of the two tracks, specifically for how those melodic lines drive into these primal, cutting cords steeped in nostalgia for old Darkthrone, Burzum, Horna, and their ilk. Eorl's vocals are just this wretched, unhallowed rasp which is not news for its genre but seems so perfectly sick and slathered in suffering over these riffs, especially where it creates a contrast against a rhythm guitar line that seems more dignified than the vitriol being spewed onto it.

Nothing involved is a revelation of any sort, these songs are roughly comparable but not entirely equal to the content which actually made the cut for the Womb full-length. The audience here is simply going to be that coven of purists which doesn't want excessive distractions that it feels might detract from their experience. Grim, rime-encrusted and shadowy orthodoxy, on vinyl, through a respected imprint in its feel. There are less than 10 minutes of content here, but while that may seem skimpy, it also means that Warloghe don't pad out their performances to the point that they'll become really boring, and while I don't feel that much of the material here is all that impressive or even really that good (the A-side didn't phase me at all), it's more or less exactly what the band's fans will be seeking out and working as intended. If you're seeking out the band for the first time, however, I would set a course straight for Womb of Pestilence and develop any further interest from there.