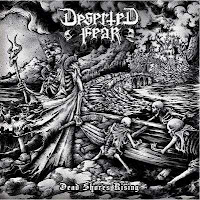 Deserted Fear have carved a pretty solid path for themselves on their first two records, and also managed to place their sound into a position which cross-pollinates with several death metal audiences, and should find a warm enough reception with all of them. Not so terribly old school that they're surviving off the aping of a singular band, and not entirely participating in the overabundant trends of early 90s Swedish Left Hand Path/Dismember death or cavernous death, their material is born of a more melodic, hook-laden core and then caked in the heavier aggression via rhythm tone and brute vocals. Certainly they sound like a peppier Bolt Thrower in places, but I think they also have a clear path to the ears of Amon Amarth's considerable fandom, or the Dutch blitz of Asphyx and Hail of Bullets, while cultivating a lot of the more melodic Swedish influence borne off the 90s melodeath explosion (At the Gates, Desultory, Hypocrisy, Dark Tranquillity, etc).

However, they're not flashy or fiddly, reliant heavily on the rhythmic backbone of the meatier guitars and the drums in lockstep. You know where a lot of their riffs are going as soon as you hear them, but they vary up the writing enough that the tunes still feel fresh and leave a moderate impact, provided you aren't averse to the warmer feel the note selections generate. This is hardly an evil sounding death metal record, despite what the skeletons on the cover might otherwise hint at, so it ends up as a more brutal and accessible strain of the style heavily loaded with ceaseless double bass patterns and a really thick and effective tone which operates largely at a mid-pace and then occasionally spurts into a more uplifting, faster tempo like the one that drives the verses of "Open Their Gates". Atmospheric and restrained leads are used to complement the battery beneath them rather than provide vehicles for their performers to show off, and this just adds to the highly structured feel of the Germans' writing, an orderly artillery unit that lays waste in cohesion rather than in spurious, chaotic skirmishes.

It's not without a few flaws. For instance, the bass on the album is fluid and functional, but generally used only as a support for the rhythm guitars, rarely sputtering out a line of interest. Manuel Glatter's vocals do feel somewhat samey after a couple tunes, even though he uses a more abusive and emotional, almost hardcore approach to his gutturals which render them less monotonous than a lot of the band's peers. There are a lot of points to the record where I was headbanging appreciatively in the midst of the experience, but couldn't remember a single lick minutes later, because a lot of the material flows a little too well into its neighbors as well as some of the other bands I mentioned earlier. I felt like, even though it wasn't a far cry from this, the sophomore Kingdom of Worms was a bit more interesting and risky, and even their debut was a bit more crushing, where as this is more safe, solid and dependable from the opener to its close. However, if you like long-time veteran bands like Grave or Unleashed who perform old school death metal with a fair amount of balance to it, not shying from melodies where suitable but also keeping one foot firmly planted in the graveyard dirt, then Dead Shores Rising is worth a listen.