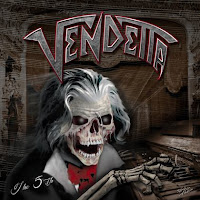 Undoubtedly a promising second stringer during the Golden Age of German thrashing, Vendetta have sadly not had the best comeback streak among their countrymen, being heavily overshadowed in this last decade much as they were in the 80s, with bands like Kreator and Destruction still soaring fairly high over followings that have been cemented for decades to come, if they can keep on kicking out the same competent continuity. Their latest, creatively titled record The 5th does not do a hell of a lot to cultivate either the catchiness of Brain Damage nor the savage velocity of their debut, but that's not to say it's entirely rubbish, only that the band continues to let a little of that 90s groove/thrash influence inflect upon the dynamic riffing and mildly melodic intensity of their prime, and not to the betterment of the finished product.

There are certainly riffing phrases across the tracks here that recall some of the earlier material, and vocalist Mario Vogel once again tries to do his own spin on the original Vendetta style from decades before he joined the ranks, but in the case of the former, they're just not memorable or quirky at all, and the latter seems a little disheveled and sloppy, unable to really drive home a good chorus, not that the rest of the band have really provided him with much to go on there. The riffs in cuts like "Deadly Sin" exhibit a little of that uplifting thrust that you'd recognize from Brain Damage, Destruction or perhaps the power thrash of Danes Artillery, but too many of the progressions rely on rather boring payoffs that don't catch the ear. The production is rather solid, with a good bite to the rhythm tracks and a nice, over the top atmosphere created when the leads enter the fray, providing for some of the better moments on the albums. But then you layer in those vocals, and the lack of a real money shot riff anywhere in a 3-4 minute track and it's average at best, goofy at worst.

It's nice that the band still maintains a fraction of that adventurous spirit they held in their youth, and for instance the classical guitar interlude "The Search" is quite nice, and you can close your eyes and just imagine if they balance that out with vintage Vendetta or Deathrow-quality heavier material, but while this does in fact set up "The Prophecy", which owns 1-2 of the more agreeable riffs on the whole record (before devolving into some lamentable breaky groove thrash), it's buried too deep in the track list to leave much of an impression. There's also something up with the drum mix here, in particular the snares which popped and hissed out of the mix a little much to distract away from the nice, warm crunch of the guitar tone. The bass guitar also doesn't really stand out to me, curving along behind the other guitars but incapable of really standing forth unless it's hitting up the good old slap and pop sound (near the end of "The Prophecy").. All that said, this is a slight bump up from 2011's Feed the Extermination. You can hear some genuine character attempting to seep through the cracks, but it's just not enough, and combined with the relatively weak cover artwork I just think this is an album that's going to be easily overlooked with so much stiff competition. And rightly so.