Six Feet Under - Graveyard Classics IV: The Number of the Priest (2016) 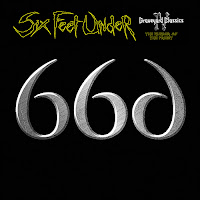 Chris Barnes' mainstay has been on a strange trajectory these last five years, first stunning me with an album that was actually good, 2012's Undead, and then proceeding to not exactly follow that up with anything worthwhile (Crypt of the Devil was decent), playing some musical chairs with his band line-up, and ultimately deciding for whatever goddamn reason to release another entry in his band's abysmal 'cover tunes' album line, Graveyard Classics. Although this time, it doesn't appear that he's even bothered to come up with a halfway decent cover concept, not like the records predecessors had anything resembling eye candy. IV: The Number of the Beast is, as if you couldn't guess, exactly as lazy as it looks, and it's a collection of strictly Judas Priest and Iron Maiden covers...

...given the 6FU treatment, of course, and by that I mean transformed into bludgeoning low rent death metal lite where the only possible entertainment value is hearing Barnes' caveman grunts fart out the lines of scream-gods Rob Halford and Bruce Dickinson. Musically the trio on this disc attempts to pair up to the originals as much as possible, only with a sluggish, chunkier rhythm guitar tone that is meant to construe some heavier aggression but winds up feeling rather dry, since the record as a whole lacks that reverb and atmosphere that helped immortalize the 70s and 80s material, which this album largely consists of. The bass and drums do their parts over the album, and I won't say it's the least competent of these Graveyard Classics offerings...the focusing on only two bands kind of helps tighten the experience, and the leads feel frilly and fun, but then you go and plaster them with these monotonous grunts, which feel poorly recorded like someone was playing the background music at a karaoke bar and Chris just grabbed up the microphone. It's a little funny to hear Ray Alder appear as a backup on the "Invader" cover, but one wonders why Chris didn't just hire Ray to sing the whole thing...that might have proven a more passable experience.

I'll give Barnes credit, though, he at least has a fairly good taste in songs by these legends, and does not simply offer up the most predicted or obvious choices in their catalogs. I normally wouldn't expect to hear someone's take on "Prowler", "Flash of the Blade", "Starbreaker" or "Genocide", and these are all included along with "Total Eclipse", "Night Crawler", and "The Evil That Men Do". I don't think there's any question the track list was carefully pored over, and without renditions of the bands' most popular tunes, it affords 6FU a little more breathing space for their interpretations. Alas, they are just not very good in the end, and it's largely the vocals and production of the rhythm guitars that don't do these versions a service. If Barnes had excused himself from this, then you might have an average album of its type, but this is just too laughable to take seriously, and the joke loses its humor about 2-3 tracks in when it just becomes sad and boring. Slightly more consistent than the first two such 6FU cover anthologies, but I would say this project 'peaked' with Graveyard Classics III. Granted, that's like saying my lunch peaked when I projectile vomited against the nearest wall, rather than just puking it into its normal porcelain receptacle. Enough already!