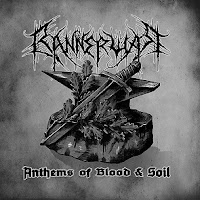 Nestled deep into the Hellenic underground, Bannerwar is a band which must be almost forgotten after a decade plus absence in the wake of its solid if unheralded sophomore Centuries of Heathen Might. And while I can't quite claim that the two tracks present on this Anthems of Blood and Soil 7-inch are going to reverse that fate, it's certainly not because the band is lacking in the hellish energy required to perform the sort of orthodox, traditional and spiteful black metal they employ. But apart from the band's NSBM roots, which may or may not persist in their inspiration, there's just not much of a 'gimmick' to this style, or any single component which can separate them from so many others performing in such a similar, straightforward realm.

If you've never experienced them, it's more or less charging European black metal with a strong 90s feel to it, very basic riffing structures spat out at a faster pace or brought down to a might, barbaric charge. The chord progressions are quite predictable here, but that doesn't really diminish much of their savagery, with the guitars loud and frontal, the vocal rasps doing a good job of providing an evil impetus towards the uptempo blasted sequences. Definitely a classic Swedish or Norse black metal vibe here circa bands like Marduk and Satyricon, but occasionally with "For Blood and Soil" itself they hit a glorious stride reminiscent of vintage Rotting Christ off Thy Mighty Contract or Triarchy. The drums are rather on the tinny side in the mix, but nonetheless efficient, while the bass is good and think, but doesn't otherwise do a lot to carve its own existence from the solidarity of the rhythms.

The two songs are reined in at about 5 minutes each, so thankfully Bannerwar has no interest in beating the listener over the head with ceaseless repetitions of tired riff patterns, and I feel that for the length of the 7" there is enough variation represented, assuming on a hypothetical third full-length they'd have an even broader range (as they did on Centuries). But the question is, at the end of the day, when the onrush of the night is inevitable, do you want another pure atavistic black metal listening session which offers you little to nothing new? If the conventions continue to attract you, then these Greeks are an adequate vehicle for vengeance and ferocity, but although the material here is just as solid as the stuff on their albums, they still just don't stand out against the crowd.