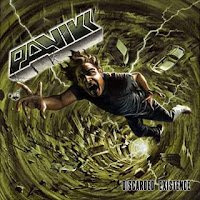 It doesn't take a lot of imagination to come up with the sound that Slovenia's Panikk are going for on their sophomore outing Discarded Existence. Those familiar with the second tier of Bay Area thrash from the 80s will remember a certain, violent debut album which also featured an individual being sucked into a swirling vortex, only this time it seems more like a tornado than a series of toothy maws. Sure enough, once you've actually given this a spin, you'll encounter a lot of the frenetic, high strung thrash metal which dominated that unsung masterwork of the genre, and I'm not going to sit here and tell you that's a bad thing, because there while it might take a few pointers from their predecessors, this is solid improvement over their 2013 debut Unbearable Conditions, and proof that putting a little effort and a fraction of complexity to the songwriting can vault you well over the shoulders of much of the useless and redundant pizza re-thrash of the last decade.

To be clear, while the primary propulsion here is a style akin to records like Eternal Nightmare or Oppressing the Masses, I'd actually draw a closer comparison to Japan thrashers Ritual Carnage who have a storied history of translated those same 80s influence into a more modern context. The vocals in particular have that higher pitch in which a lot of the lines spit out the same notes over and over to create a disaffected style first pioneered by Joey Belladonna of Anthrax. In this case, though, while the vocals are certainly well suited to this jerking, thrashing mix, it's really the riffs that take center stage and manifest the rich intensity of the experience, each track being loaded with a good share of variations and occasional subtleties which range from the viciousness of a Destruction or Vio-Lence to even the turbo fueled power/thrash of Artillery that I so admired coming up. It's not insanely technical or unique, but cuts a nice line between clinical neck-straining and familiar but not wholly bitten off riff progressions that you'll recount from both the German and US scenes, from primal S.O.D. mosh to the scalpel-thrash of the aforementioned Schmier and company.

Discarded Existence is carefully calculated to give you both that richer impression of thrash and its musicianship, with soaring, sailing and wailing leads as well as a whole slew of mid-paced pure head banging riffs that keep the experience a lot more grounded than the victim on its cover. Drums and bass provide an accurate level of support, but are never able to take the reins away from the axes for any length of time, which has never really been the point of this genre. Thankfully, that rhythm tone is just excellent, precise and full-bodied enough to satisfy the production gluttons who want a record which sounds 21st century. While I can't say it produces endless replay value or tunes that are likely to become classics, the whole thing is consistent and entertaining to listen through, with lyrics that stick to the social and political topics thrash has long touted, and a level of energy that never lets up, but leaves plenty of room for variation in tempo and lead-work. If you fondly recount the vitriol and testosterone of records like Signs of Life, Eternal Nightmare, Product of Society, Release from Agony and others of that critical 1986-1990 period, Panikk does a swell job of refreshing the formula.