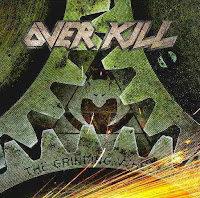 New York wildmen Overkill have hit a late career stride that must be the envy of so many peers, with an endless reserve of energy that most younger bands seem unable to match, while keeping relatively loyal to the body of work they built up over the previous decades. To be truthful, you could trace a fairly straight path from their 1985 debut to this latest, 18th full-length album, and the only enormous differences would be the production and a few of the influences that crept into their songwriting, particularly in the 90s. Essentially, The Grinding Wheel serves as a paean to both their high-octane urban thrash and groove metal, proving they still have what it takes to write engaging, violent music that actually surpasses much of what they were putting out 20 years ago, even if it's not quite elevated to that benchmark set by beloved classics like Feel the Fire and Taking Over.

This is a band long driven by the restlessness and street wisdom of its front man, Blitz, and it's par for the course that his performance can make or break even a wholly average set of guitar riffs. And here he turns in an angry, confident, flailing effort right on the level of 2012's The Electric Age, with a lot of snarl and flexibility to his timbre that doesn't rely entirely on the higher range, and excels once the band hammers into some more anthemic, melodic chorus in a tune like "Our Finest Hour". I can't say there is anything here he hasn't hit on in the past, but he sounds great whether the band are meting out faster paced pavement justice or one of their fattened, predictable Sabbath grooves. The rhythm riffs, on the other hand, are really hit or miss, most seeming like they're just paraphrased from a grab bag of the band's prior ideas, and relying heavily on both the lyrical execution and the fat production, but once in awhile one or two will prove a little catchier and more unexpected than their surroundings, and that helps boost the structure and reliability of the songwriting, especially in some of the longer 6-7 minute cuts.

Drums and bass are bedrock here, especially D.D. Verni who's trademark, clean and huge tones are bouncing and twisting all over the mix. Leads have a very classic 70s rock feel to them, not only in the excellent bonus track cover of Thin Lizzy's "Emerald", but even in the original pieces. The range and the variation on the record is quite good, from pace pushers like "Goddamn Trouble" or "Red White and Blue" to leaden, bluesy groove like "Come Heavy" which recounts late 80s Trouble quite well, or the epic, measured mid-gait headbanging title track. The album dishes out just enough breakdowns to keep the tough guy crowds slamming while never becoming too trite or repetitious, and while the thrash here is more inspired by the band's 90s offerings than the clinical late 80s style, I think it's punishing enough to temporarily satisfy those who might have been seeking the latter. Even within Ellsworth's performance, he doesn't keep aping the same verbal patterns repeatedly, but offers seasons, explosive craftsmanship that makes every line seem like it's being taken dead seriously.

Will this stand out against the band's stacked backlog? Hard to say, since it lacks the insanely memorable choruses and riffs of the band's youth, or even that cross-generation appeal of 2010's Ironbound, which was a pivotal release that cemented their legacy as perhaps the U.S.A's hardest working band in the genre, whilst in the midst of the pizza thrashing craze of younglings who were getting into the stuff for the first time. I didn't like that disc quite as much as the rest of the crowd, but its sense of newfound inspiration has seemingly abated over these following three records, all of which have been varying shades of green, and varying shades of good. The Grinding Wheel is no exception, and it is not short on enthusiasm, spirit or craft. After a couple lukewarm listens, it's grown a little in my estimation so that I'd rank it firmly between its two predecessors.