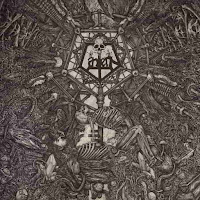 Lantern's 2013 debut Below was one of those debut full-lengths so stacked with both subtle and overt qualities and flavors that it'd inevitably ramp up expectations for anything the Finns might follow it up with. An excellent permutation of the cavernous death metal that has been all the rage these last 5-10 years, it's application of both murk and melody into an unnerving but fulfilling whole set it apart from the lion's share of Incanta-clones who were becoming redundant despite their best intentions. II: Morphosis doesn't quite have the ability to take any listener by surprise the way its elder sibling did, so the duo of Cruciatus and Necrophilos just settled for concocting a damn fine, atmospheric death metal record which replicated most of the strengths of its predecessor but did not by any means clone it entirely. Thus you've got a sophomore which is almost guaranteed to satisfy listeners of records like last year's Blood Incantation full length, Starspawn, in fashioning reliable and well written death metal riff progressions into something of which the sum just feels greater than any individual parts.

Morphosis is not just some roiling, teething, subterranean sounding morass with guttural vocals and no ambition, but instead a sprawling and balanced offering which exceeds the maturity you'd expect after just a few years. The rhythm guitars are less ominous and far busier, the tone straightforward and dry but capable of translating the massive riff set splayed out across the 40 minutes. While they don't perform material which could technically be considered complex, the album nonetheless creates a labyrinthine intensity which never hinges on the predictable. While there are riff patterns in here which might straddle everything from prototype 90s melodic death metal to Scandinavian blackness, the bulk of the chord selections almost felt like a mash-up of the first three Morbid Angel records, with all the speed and hooks of the first and third, with the occasionally slogging malevolence that many associate with the second. Melodies aren't just employed as cheap gimmicks, but often these essential and ritualistic sequences of songs that are often left to their own while light percussion rattles off as accompaniment. They are also prone to a few abrupt stops and starts and occasionally fly off the handle into more chaotic, frenzied moments where there is just enough control that the record hasn't felt like it's gone over the edge into the abyss without a pilot.

The ability to soundscape an atmosphere through the conventional death metal milieu here is just astounding, as in the escalation in the shorter tune "Hosting Yellow Fungi", or the mournful maze of "Necrotic Epiphanies" with all its wailing excess and double kick mashing fury. Lantern take the familiar and reinvigorate by giving it greater breadth and dimension. The vocals aren't just some utterly deep gurgle, but more of a hacked, angry, atmospheric take on something like Barney Greenway meets Steve Tucker only with tons of shrieking and raving for variety. The flexibility of the drumming allows the material to thrive at any speed, whether it's verging on grind or just the more robust, melodic and measured passages. There's also this feeling I got that the record was gradually becoming more immersive and memorable as it progressed, so by the finale "Lucid Endlessness" I felt like I was really hearing the best stuff on the whole album, rapid riffing and dissonant waves spiraling into my ears, until it hits that great, slow and groovy bridge that just carried it off into the nether. Intentional or not, this is a rare reaction I get to an album where it starts off good but then just evolves into blockbuster territory.

All that praise aside, I found it marginally less compelling and resonant than Below, if only because I felt like I connected to that debut's eeriness and its particular melodies slightly more. I imagine for many listeners, it will easily compensate with its more substantial and urgent sense of ambition and its tighter pendulum of structure and chaos; yet I wasn't quite hypnotized as often in listening though. But really we're dealing with apples and oranges, because this band is still at the very summit of the Finnish death metal scene of the present, with so much to offer, a true torchbearer for their forebears like Demilich, Demigod, or Convulsed, only sounding very little like any of those, with a lot more of a US influence to their composition split between the genre's Florida and New York founders. The fact is that Lantern use that simply as a foundation. Where they go with it is anyone's guess, and two full-length records in, they show more practice and potential than a lot of bands with decades more experience, crafting great death metal worthy of the howling planes of Pandemonium.