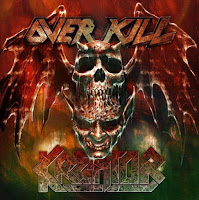 You've got to love how the metal press, particularly the metal press in Europe, finds a way to keep its subscriptions afloat in the digital age, and I think a key element of that is the inclusion of special live or unreleased material from popular bands that attract collectors. Germans Kreator have taken advantage of this exposure numerous times, especially in their homeland, recently with their Violence Unleashed EP in Legacy, Live Antichrist album in Metal Hammer, and now another bonus vignette in Rock Hard, who they've teamed up with before for the Terror Prevails live album in 2010. This time, however, they've got New York's Overkill on board, and both are offering something we might not have heard before. Is that enough to pick up (or import) a copy of the Rock Hard #358?

Overkill are no stranger to paying homage to their influences, what with their decent 1999 release Coverkill and various tunes added to other releases, like their rendition of Edgar Winter's "Frankenstein" on Horrorscope, or more recently Thin Lizzy's "Emerald" on The Grinding Wheel. That said, I can't recall hearing them perform a country cover, and what's more, playing the song IN that style, rather than metalizing it. And so they have done here with Johnny Cash's "Man in Black", spun out with Bobby Ellsworth's unhinged screams in a duet with more a straightforward voice. The lyrics aside, this has never been one of my favorite Cash tracks, and so I can't say I was thoroughly impressed by the band playing it close to the original, when a heavier injection might have at least proven interesting, but overall it's a passable version and it's nice to hear Blitz at least try to apply his own distinctness to a pretty mundane musical exercise.

I was far more interested to hear "Warrior Heart", a new Kreator track with a driving melodic death metal feel to it that would not have been out of place on the recent Gods of Violence, or perhaps on some comparable excursions like 2001' Violent Revolution. Granted, there's nothing exceptional here either, and you feel like you've encountered the melodies before across a number of Swedish bands, but it's wholly competent and never a detriment to hear Mille's voice grating over the grace of those airier harmonies, or the straight heavy metal thrust of the bridge and its substantial leads. So this is the side of the split which ended up appealing to me a lot more, it's at least on par with some of the other recent tracks and one could get some value out of ripping an .mp3 of it and tossing it on his or her Gods of Violence playlist.

Overall, it's a decent gimmick that rewards the integral symbiosis of musicians and press, even if the content is rather scant and not all that great. Nothing on the level of Sabbat's brilliant "Blood for the Blood God" flexi in that old issue of White Dwarf, but Rock Hard isn't leaving you with nothing.