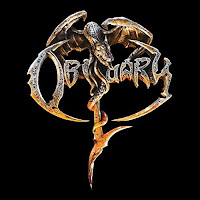 Apart from the first two records, both excellent, I've been fairly ruthless with the Obituary catalog. There have been occasional tracks of note permeating the last 27 years of material, but so much of it felt phoned in, lazy and lacking in the menace and savagery of Slowly We Rot or its groovier, more minimalist and memorable follow up Cause of Death. The band experimented with a more hardcore, mosh oriented sound and audience at one point, which had mixed results, but have since come back around to exploring their roots in detail, trying to figure out what made those early records stick as classics. I'm surprised to say that the eponymous 10th album has done a better job of that than the last seven, by reaching right back to that wretchedness of their formative years and supplementing with something I just didn't expect, a more pure 'heavy metal' sense of melody and structure to several of the riffs, in particular the bridge and lead sections.

So rather than some dissonant, whipping frenzy of a solo, they'll break out something a little more blues based or accessible sounding, and stunningly, it works rather well. That's not to say it's the first time they've crossed that line, but here it actually complements the more ruthless and ripping rhythm guitar tracks throughout the verses, most of which are more or less paraphrased from the band's huge backlog with an emphasis on the earliest material. A few chords are tweaked here or there, but you'll pretty quickly identify where a lot of the note progressions or grooves are hailing from. Only, because I've felt so long parched for Obituary that I enjoy, I'm a little more forgiving here, especially with how angry and vicious John sounds with these vocals in cuts like "Kneel Before Me" or swaggering "Lesson in Vengeance". He's not belching out anything out of the ordinary, but there's a caustic and mean balance between how his voice is mixed here and the sheer might of the rhythm guitars which totally overpowered my speakers and had me rictus grinning from cheek to cheek.

Granted, it doesn't hurt that cuts like "It Lives" feel like they were taken from the Cause of Death sessions, my favorite record from the band, but this has never been a band that flaunted a lot of progression or originality once they had first made their mark with a more gruesome if simple brand of thrash-infused death metal that their statesmen like Death first created. You're still hearing a few of those meaty, Hellhammer-style groove breaks and fat, oozing bass lines, but a lot of the material here is just this wall of mortuary flesh strengthened by the double kick batteries and the cruel symbiosis of Tardy's grating growls and the murderous bent of his lyrics (love that sustained growl that opens "Turned to Stone"). Obituary isn't a total success for all its retread ground and a few tracks seeming staler than others, but it's for sure the first time in a great many years where I have been so thoroughly entertained by one of their releases, and I've already listened through the thing like a dozen times without getting tired of it. Beyond that, it's got enough of an internal variation that it should sate both fans of the more ripping, faster material or the gym-busting bro-groove. Cool.