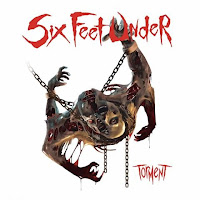 Despite it's Bleeding-era, trilly little fakeout riff, "Sacrificial Kill" is hands down one of the dullest album openers I've had sitting on my review pile in quite some time, and although it tries to pick itself up with a hustling end section, the riffs being meted out are the kind of low caliber, Six Feet Under material that one would all too quickly delegate to the dustbin as soon as possible, the boredom that at least half this band's albums in the past have choked themselves to death on. Thankfully, elsewhere, Torment gets a little peppier, marginally more ambitious, in that it offers up some more energetic simpleton death metal infused with some groove and nu- metal sequences, but the songwriting overall is just not on the level that they hit with their rare gem Undead or the previous full-length, Crypt of the Devil, which was solid if only because of the temporary roster involved with it.

Speaking of interesting guests, I was interested to hear that ex-Brain Drill bassist was contributing more here than he did on the last one, and once more impressed that he was able to chill out and maintain such a level of restraint throughout the mind numbingly boring half of this disc which is comprised of about 3-4 songs where the idea is to contrast repetitive, barebones primal mugging death metal riffs with the slightly more tech side revealed on Crypt. He doesn't get nearly as flashy as he would in his alma mater, of course, this music couldn't support it, but unfortunately I felt like the content of Torment is just so dry and lacking in real inspiration that it's all for nothing. While a good chunk of this album is far from bumbling or incompetent, I could narrow it's finer moments down to just a couple tracks, like "Schizomaniac" which has some nice thrashing carved out through it's death acrobatics, or the straight neck-jerking base-level death/thrash in "Slaughtered As They Slept", which functions despite how 'heard before' the whole thing plays out. Other than that, there weren't many tracks I enjoyed through and through.

Chris sounds better here than on the previous year's Graveyard Classics IV compilation, where he did an abysmal job of covering Rob Halford and Bruce Dickinson with his grunting. Here the battering, bludgeoning timbre of his voice cedes itself to the concussive drumming and viler riff selection a lot more than when he's trying to front such classic riffs; and there are more than a few stylistic nods here to The Bleeding, his finest moment in Cannibal Corpse, but infused with the stoned groove style of riffs that dominated early 6FU recordings like Haunted or Warpath. The mix of the album is quite straightforward, a little dry and doesn't really lend itself well to atmosphere unless Hughell is filling in the blanks with some busier bass lines, but this is par for the course for much of the band's career, and in the end you've got a product here which is the least composed or interesting of their post 2010- works, an era in which they finally seem to most closely have flirted with and even dated some level of quality. Undead, Crypt of the Devil or even Unborn would be more worth your time, but it's not a complete dropping of the ball, just a near-fumble.