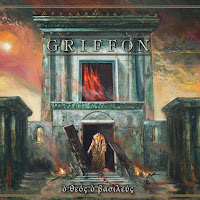 Another group ascending to the top tiers of modern French black metal acts, Griffon has in a few years and a couple of albums refined itself into a blazing balancing scale of savagery and atmosphere which it makes sound positively effortless. The Greek title and themes give it a sort of innate 'thinking man's' aesthetics, but I don't want to mislead anyone into thinking that this is any way overly flashy or technical or 'progressive' for its style...we've heard the components to this a myriad of times, but the reason this band stands out is how perfectly it aligns the blackened high velocity riffing and rasping with the elegant symphonics woven in and around the metal, narration and creepier or calm passages which feel like the polar opposite of when they lay on the fast and fury.

Part of this is the seamless production, which is leveling out everything from the spacious choirs, French spoken word, pianos, strings, sparkling leads and harmonies, and then the over the top rasps of Aharon which transcend their own hideousness as a sort of cradle of primacy from which the more elegant tones bloom. There's a lot of melancholy and somber grace which carry the moods of the note choices, there isn't much of an evil vibe to the material so much as there is a sort of searing paean to the tragedies of antiquity. The guitars are rich with riffing of all styles, from black tremolo picking to more punchy power or progressive metal sequences; and you could even feel that they'd entertain regardless of whether all the other elements of the band's orchestration were absent other than the intense drumming and vocals. But neither does it hurt the material whatsoever that it is so saturated with the airiness of the symphonics which are often complimenting the guitars on a note-for-note basis.

The album feels just right at around 40 minutes, with only one track that is pure interlude ("..et Praetera Nihil"), and even that one feels lush with its fluttering flutes and eerie, somber male choirs. Nothing ever feels tacky or overblown despite the sheer variety, and I'd say this might be the greatest attempt at a sort of 'neo-classicist' black metal I've heard on the French scenes. Where they've got their avant-garde exemplars and a strong wave of Renaissance or Medieval themed black metal outfits, and a few that check the boxes for other sub-strains of the genre, Griffon sounds rather refreshing and unique, and when it comes to proficiency and production they really have it all down pat on what is only their sophomore full-length, with much more to offer than 2016's Har HaKarmel, which was on its own already a fairly accomplished formidable debut, and sets up the material here even with its slightly less polished approach. But Ὸ θεὀς ὸ βασιλεὐς is simply next level, and offers earned rewards with each repeated listen, with enough of an identity that it stands alongside but apart the major names in symphonic European black metal.