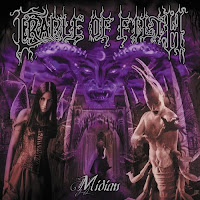 Midian was the second album in a row where I felt Cradle was dropping the smutty Gothic vampire Wordsworth mentality to explore some more compelling concepts that fit their musical style pretty well. I'm not saying that there isn't still a bit of that libertine sizzle in there, or that the delivery of the lyrics or the instruments had changed terribly much from efforts like Dusk and Her Embrace or Cruelty and the Beast, but I can't think of many bands that, from their inception, were pretty much destined to pay tribute to their countryman writer Clive Barker than this one. If the album title didn't give it away, he was a huge influence on this, with a healthy helping of Lovecraft for good measure. The cover artwork on this might not be their sexiest or highest quality photography; the creature looks a little cheesy as does the figure up in the purple clouds, but at least it has some detail to it and a nice color scheme that differentiated it from their others, with their awesome logo just at home as on any other of their releases.

What isn't in any question for me is the quality of the writing here, because SPOILER ALERT, Midian is my favorite album of their nearly three-decade career to date. The compositions are rich in variety, with a salvo of riffs in every track that instantly stamped me as memorable. This also has to be one of their best incorporations of pianos, synthesizers and ethereal female vocals that work in lockstep with the metal instruments, never coming across quite like a gimmick but rather a stew of components that would seem mandatory to create such a paean to the horror material which inspired them. I think the production also holds up quite well, especially at higher volumes, despite everything going on I can hear all the little guitar zips, every percussive strike, all the panoply of schizoid Dani Filth vocals and the numerous guest vocalists like Sarah Jezebel Deva and Mika Lindberg. Having Pinhead himself narrate on three of the tracks could have proven goofy if handled incorrectly, but instead he gives us a tone like the deepest lines of his iconic Cenobite and it blends right in. And while Cradle of Filth by this period was already a target of mockery for the black metal gatekeepers, before they seemed to magically reclaim acceptance in the late 'Oughts, Midian was sure as shit more creepy and evil sounding than a lot of the other bland purist third wave black metal spewing forth from Europe and the States by the turn of the century.
But it's the SONGs, the songs that draw me back to this one time and time again, and I've made it a habit that I listen to this one every October, a staple to go alongside the first five King Diamond discs, the first two Danzigs, Keeper of the Seven Keys, you know the drill. It's a perfect haunted house sort of sound, only more like a haunted labyrinth with unknowable Escher-like dimensions. "Her Ghost in the Fog" is one of top Cradle tracks, with its snake-charmer rhythms that range between warm and chilling, excellent flow of keyboards and some of the best Dani vocals ever which maniacally shift between throaty whispers, petulant sneers and guttural shadows. "Cthulhu Dawn" is one of their most impressive, charging nocturnal black metal pieces with great tremolo guitar lines and an almost weirdly Wagnerian vibe to the synthesizers, plus some of the more spooky female vocal harmonies they've ever used behind the surging verses which still have Filth plastered all over them. When it breaks into that high speed organ bit and the guitar melodies burn back in I swear I felt like I was in a tryst with with Peter Cushing, Vincent Price and Christopher Lee simultaneously. There is no track I would toss out of this..."Death Magick for Adepts", the more brutal "Lord Abortion", the thundering "Tortured Soul Asylum", even the purely instrumental synth piece "Creatures That Kissed in Cold Mirrors" is fucking Tales of the Crypt-level wonderful.
That the lyrics absolutely rule is no surprise, that's been the case for almost everything they've put out, even their most mediocre records like Midian's followup Damnation and a Day can be fun to read through; Filth puts more thought and time into composing these than almost anyone in the entire genre, and even if the guy could be teased for having the presence of a Gremlin tearing up the display shelves at a Hot Topic, I would probably just buy books of his lyrics alone, even if no songs were written to accompany them. A Byron to counter the twerk generation, as fluent in penny dreadfuls and occult lexicons as he is those most acclaimed Major British Dead Guys. Midian really puts the third-time charm in their most pivotal streak of records beginning with Dusk and Her Embrace, and for the life of me, even though I've enjoyed their last decade or so of albums from Godspeed to Cryptoriana, I can't tell you with a straight face that they've ever surpassed or progressed beyond what is written here. All mere permutations on peak Filth, platitudes for the appreciators of their perverse pantomimes. Jesus, now I'm beginning to sound a lot like this motherfucker, put a stake in me.