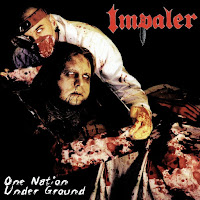 With all the rage over nasty speed metal acts like Midnight over the last decade, it's a little surprising that Minnesota's Impaler wallows in such relative obscurity. Not that they're entirely unknown or unapproachable, they've got a pretty decent internet presence and continue to record and play gigs even after decades; but their love of horror flicks, wrestling, their mesh of speed, heavy metal, and punk, and the cinematic gore and camp of their stage shows seems like it's a concoction that should have appealed to a far wider audience, especially as they've just been doing it for so long and never really turned from their path. Maybe they don't write the most impressive licks, but they've got the heart and sincerity in spades, a speed metal institution forever destined to sit below the radar.

One Nation Under Ground was their fifth full-length album released through the now-defunct Root of All Evil Records, and while the production had come a ways from their earlier efforts like If We Had Brains ...We'd Be Dangerous or Rise of the Mutants, the style is roughly the same. Simplistic rock & roll riffs played with metallic energy and slathered in Bill Lindsey's signature splatter-punk vocals, which can range from a more meaty bark to something more petulant and punky, with lots of gang shouts thrown in there for good measure. The way he exaggerates his style with that grimy, constipated edge almost reminds me of Alice Cooper, one of his biggest influences, as enforced by the presence of a "Teenage Frankenstein" cover which is second-to-last on the album. The drums have a great tone to them, the bass and rhythm guitar are fairly clean in the mix, but manage to catch a little bit of that infectious punk vibe you'll recall from a lot of your faves in the 80s. There are plenty of lead guitars, too, usually with more of a bluesy, reckless hard rock feel to them, fitting to the rhythm riffs but not too memorable on their own.

There are 15 tracks here, almost all weighing in at around 2-3 minutes, with just a couple that go longer, like the darker, doomier sounding "Under the Dirt". Occasionally they'll incorporate a spoken sample, or some special effects like the bell and howl you hear in the depths of "Dead as a Doornail", to keep you on the page with their horror influences. Once in awhile the riffs can get a little bit more thrashy as in "Call of the Wild", but the majority of them are more rooted in punk and straight hard rock; almost all of them do feel as if you've heard them elsewhere, even by the standards of 20 years ago. Thankfully, the production makes up for this a little, the instruments and vocals sound brash and bright and energized. I guess my other complaint would be one that I'd apply to a lot of horror-punk, psychobilly or horror-influenced metal in that the musical choices themselves rarely evoke the more evil and dark side of the genre. There's nothing creepy ever happening outside of those aforementioned samples, effects or Lindey's gruesome vocals, the tunes could use a little more dissonance, atmosphere or 'evil' note selections to make them stand out...

...but again, I've had this issue since the Misfits. It doesn't make the music bad at all, but it's more like attending a Halloween party with your family, bobbing for apples, carving a pumpkin and having a good cheer rather than getting chased through an abandoned, dilapidated asylum by a serial killer or supernatural entity. The lyrics are fun enough for what you get, tributes to old or campy horror flicks and they even have a nod to Bill's love of wrestling entertainment with "Cage Match Tragedy". The Alice Cooper cover is pretty decent, and the material is consistent over the 41 minutes, but it just doesn't stick with me for long after I'm finished. It seems mostly built to go along easily with their live shows with all the blood, guts and debauchery that ensues, and there's nothing wrong with that.

Posted by autothrall at 5:28 PM