Sulphur Aeon - Gateway to the Antisphere (2015) 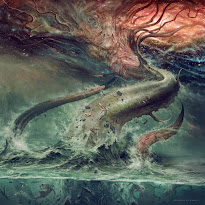 As fond as I've grown for the older school death metal aesthetics that initially won me over to the genre in the 80s, and the acts that today continue to refine and redux those specific traits, there's something to be said for a band that doesn't strictly rest on the laurels of its genre. Sulphur Aeon is one such band, and within the span of a single decade has risen to stand alongside groups with three times the lifespan behind them; a new bastion of production, professionalism, and style which has become a thing unto itself. That's not to say you can't trace individual components of the Germans' sound back to some of the usual suspects, but it's how they intertwine elements of classic and brutal death metal, black metal, and even melodic death into a daunting, unified whole that gives them a near limitless arsenal of weaponry at their disposal.

Perhaps less distinct is that they tackle the popular subject of cosmic horror, the Lovecraft Mythos in particular, but they've definitely got a focus on the more post-apocalyptic approach vector. The Old Ones have already arrived, their cataclysmic destruction being wrought upon both mankind and nature itself, or at least this is what is captured in the songwriting. Their extraordinary debut Swallowed by the Ocean's Tide definitely had the aquatic/R'lyeh vibe going for it, but here, like the Ola Larsson cover artwork splendidly depicts, they're stretching their tentacles between sea and stars. Musically, it doesn't diverge a great deal from its predecessor, but Gateway to the Antisphere certainly plays around with a greater range of dynamics, from slower, roiling, rumbling atmospheric rhythms to thundering blast sequences which put them right on the same level of finesse as veteran groups like Behemoth, Septic Flesh, Morbid Angel, Nile and Vader which could all be considered peers in terms of skirting the sweeping, epic parameters of death metal's entire potential. Tracks like "Calls from Below" or "He is the Gate" lay it on thick, there is constantly something interesting going on...Daniel Dickmann's frenetic bricklaying, sheens of melodies in the guitars that contain both elements of Eastern influence and beyond, Martin's guttural dominance and sustained growls that mange to have just enough personality where he doesn't feel generic.

Gateway to the Antisphere feels like the aural accompaniment to a plane larger than this or any other, one of controlled primordial chaos machinated by minds older than the universe. A symphony of punishment and suffering. It's not the creeping dread and despair you might expect from a Lovecraft story, but the end-state of having the gates of reality blown apart and all humanity put to knee before its new masters that they cannot comprehend. It's not insanely complex when it comes to individual compositions, but once you weave this all together it's just a magnificent devastating force that maintains a fair degree of musicality amidst all of its violence. All told, I didn't think this one quite as catchy as the debut, but more balanced in tempo and presentation and thus nearly on the same level due to such well-roundedness. The lyrics are good, the packaging impressive, and there's really no expense spared to create a formidable sophomore that is worth every penny. Fans of the aforementioned bands, or others like Mithras and Heaving Earth, should make this one mandatory to at least check out, and really anyone into any mixed concentration of extreme metal and cosmic horror should follow suit.

Posted by autothrall at 2:22 AM