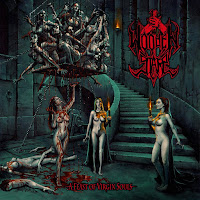 Another of many projects within the extended Razorback family to cross over members, Wooden Stake revolves around Vanessa Alucarda of Howling, Scaremaker, Orloff, and Surgikill, among many other acts. She was partnered up with the prolific Wayne 'Elektrokutioner' Sarantopoulos for the earlier album Dungeon Prayers & Tombyard Serenades and several other splits and EPs, but here is joined by her fellow Vaultwraith maniac William Warlaw for this sophomore effort, which somewhat steps away from the death/doom of previous outings for a focus leaning more on the latter half of that pairing. She still uses harsher snarls and growls fairly often, but the guitars themselves are written more with a mix of mournful traditional doom and heavy metal aesthetics in mind, a nice complement to the Gothic horror ritualism and occult themes within the lyrics.

If you couldn't tell by the lascivious cover artwork, A Feast of Virgin Souls kind of plays out like an X-rated alternate to a Hammer Horror flick: slow and steadily paced, not terribly action-oriented, with a lavish colorful palette for suffering. Atmosphere is established early on with the bass and synth-driven into "Dead Winter Resurrection" before you are introduced to the reverb-soaked, eerie doom riffing which traces its lineage back to stuff like Candlemass or Pentagram, with a few more Trouble-like groove riffs here or there. The beats are sufficient to create a genuine momentum along with a couple fills, but it's really Wardlaw's guitars and Vanessa's vocals that make this experience. I'm more accustomed to hearing her snarls or growls, which are here in abundance, but generally as a complement to her cleans, which are actually pretty good. In fact, they wouldn't be out of place in trendier groups like a Witch Mountain or Windhand, only Wooden Stake specializes far more in despair and lamentation than the more stoner-heavy vibes from those. In tracks like "Alzbeta: The Devil's Bitch", they actually sound quite effective being matched up with her sustained snarling.

Occasionally this record creates a hypnotic effect with a beat plodding along while William nails you with some of those good old bendy Sabbath notes (also in "Alzbeta") and Vanessa creates a sort of vampiric narration below. Quite evil and cool, but this record is also pretty effective when they veer a little more towards the group's death/doom origins on "Cross-Scalded Flesh". There are few songs that fall behind any others, with highlights coming in the title track, "Hanging from the Inverted Cross" and the finale "Curse of the Cauldron Countess", all stuff that would appeal to a lot of doom and horror fans if this band could ever get on their radars. The lyrics are likewise well written. The one weakness here is probably in the ability of the band to transition, they'll come in with a single pattern or tempo in mind, and offer you some variation, but it always feels uninteresting in its execution. They could also experiment a little more with the atmospherics, maybe some more organs, flutes and so forth could really help flesh this out. But A Feast of Virgin Souls is unquestionably catchy despite this roughness about its edges. I think with busier, organic drumming and maybe some more oversight and editing into how the tunes are structured, you could have a killer band.