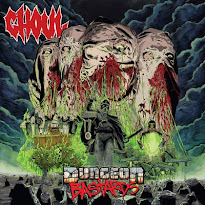 It would be remiss of me to discuss Dungeon Bastards without first mentioning what fun packaging the CD comes with. Not only is the rear cover a mock-up of an old Dungeons & Dragons module, but the center of the fold-out is also a ridiculous roll & move board game complete with rules and everything, simultaneously helping flesh out some of the worldbuilding for their whole Creepsylvania schtick. The lyrics within are accompanied by an adventure narrative which ties the whole thing together as a concept album for all their Ghoulunatics to enjoy. As silly as it all might seem, few bands put such effort together for a product that can be appreciated well beyond just its listening capacity, and top that all off with some great comic-like artwork by Mark Richards of Heavy Hand Illustrations, and what is arguably the best of the band's album productions to date, and you've got the band's strongest attempt yet at breaking through into the wider metal audience...

On the other hand, despite all Ghoul has going for them this time, the songs themselves aren't quite so memorable as the packaging, or at least they don't start off the lineup of tracks here on the strongest of footing. This is still the same grab-bag of grind, thrash and death metal they've been serving up since the beginning of their mystery project, and it's more exciting than Transmission Zero before it, but the riffs don't always land with me, not because they're badly written or unfit, but just because a lot of the note patterns are just familiar to myself or others who have explored these sub-genres before. They still punch pretty hard thanks to the excellent, level production values that provide equal impact for the drums, guitars, and multiple vocal styles, but it isn't until "Dungeon Bastards" itself, or their fan anthem "Ghoulunatics" that I'm running into some riffs that really stick out to me, both well balanced attacks of their grinding guitars, fast-paced percussive battery, gang shouts and some really nice little metal leads, especially in the latter. I feel like these would have been better to kick off the whole album rather than "Bringer of War", not that it's bad but just suffers from some of the blander riff selections.
Thankfully, on the whole, the Ghoul personality shines through the whole affair, with the interchange of carnal rasps, thuggish gutturals and even some rhyming spoken bits that remind me a little of stuff like GWAR's manager in how they interplay with the rest of the chaos. The musicianship is on point, especially in how they balance out their tempo shifting and the pace of the album overall, and if you're down with this sort of 'funhouse' spin on the Carcass styles circa 1989-1993, or Ghoul's own sister acts Exhumed and Impaled, or Exodus or Vio-lence style thrashing on Fabulous Disaster or Eternal Nightmare and beyond, this is structurally on par with just about any of that. But apart from the actual mix of the album, with its wonderfully chunky guitars and effortlessly consistent rhythm section, there aren't really as many new ideas within the music itself as there are for the cover artwork. Superficially this exceeds its predecessors on all fronts, but it's the trifecta of We Came for the Dead, Maniaxe and Splatterthrash where they hit their peak charm, so I'm still more likely to pull those out of the cauldron whenever I need my fix of these four hooded freaks. Having said that, you can still have a blast with Dungeon Bastards cruising around with your bros on Halloween night, ganja and silly string in hand, aiming to misbehave.