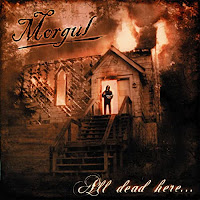 All Dead Here... might not turn out to be the final Morgul album, but it was the last before a 15-year absence that continues to the day that I'm writing this, and also an effort with furthered emphasized and explored the aesthetics that Jack D. Ripper had begun to incorporate around the time of his third (and best) effort The Horror Grandeur. This is more or less a Gothic/black metal hybrid, a fairly far cry from his earlier outings which were more true to their Scandinavian peers in sound. Morgul had developed into a band that ran more of a parallel with Cradle of Filth, Dimmu Borgir, Hecate Enthroned or groups of that ilk, or if I'm going to be most specific, the Norse supergroup Kovenant, which I got a few flashbacks to as I was revisiting this one, especially in some of Jack's more impish, playful vocal lines in tunes like "The Need to Kill". Or the Finns Gloomy Grim, who for a number of albums had a style eerily similar to this one, to the point that I feel safe saying fans of one with almost assuredly get a kick out of the other.

Basically there's a bedrock of lush orchestration created with synthesizers, sometimes used, as in "Intro, The Mask of Sanity" to create a classic horror feel with some carnival-like keys and well timed strikes of percussion. The beats through the album are a mix of purely industrial/techno and then a few heavier ones more akin to its extreme metal origins. The rhythm guitars involve a lot of very simple, chugging and/or thrashing riff progressions which are semi-moshable, but not all that exciting if you were to take them out of the context that they're serving as anchors of aggression for the airier synth tones or Ripper's schizoid exchanges of black metal snarls, deeper gutturals and more acidic narrative cleans. This is often the most drugged out sounding album he's done, perhaps going a little overboard to the extent of self-caricature with the vocals alone, but then again some of the audience might have felt he'd been doing this since the two albums before. Every now and then you'll get this really fun overlap of these ideas, like the rolling chugs in the title track that are balanced off against the eerie strings, but the fact is that even by 2005's standards a lot of the lower end riffs on this album had been beaten to death.

The guitar tone is well produced though, and even though the vocals are often a little overbearing, most of the instrumentation is well balanced for the 21st century Gothic metal audience who will probably most appreciate this. The compositions are consistent to the point that you feel as if you could pluck a part out of one song, toss it into another and few would be the wiser. I personally enjoyed the guitars most when they were branching off into a harmony or some Eastern sounding passage, it made the album feel like it belonged in the soundtrack to some modern Mummy movie with all the lurching aggression. Tracks like "Shackled" and "Empty" have a great deal of potential that simply isn't realized when they devolve into some of the more rudimentary rhythm guitars. The lyrics here are focused more on generic concepts of death, pain and isolation, so it's not too detailed with horror theming. Although I'd hesitate to call All Dead Here... bad at all, it just doesn't really evolve or improve upon the style he had going on The Horror Grandeur or Sketch of Supposed Murder, it's not terribly inspired, and I can understand why he'd want to give the project a lengthy rest afterward. It's the least of the Morgul efforts, but there was an audience for this sort of sound if you were into stuff like the Napalm Records roster of that day and age.