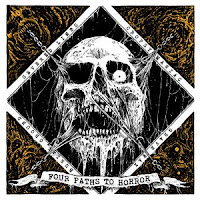 Four Paths to Horror is a 12 track split CD featuring four bands, three of which are projects from prolific death metal gurus Kam Lee, Rogga Johansson and Patrick Bruss, who combined must make up a not insignificant portion of death metal releases these last two decades. The idea of course is that all of these groups have a heavy lyrical bent on the horror genre, something that can probably also be said for the wealth of that trio's constituent bands. That is truly the connecting ligament on this release, because individual, while there are comparable traits between the acts, they often approach their genre with different production values and songwriting quality, and while that's not always an unwelcome factor on a split recording, it sometimes works to the detriment here because the level of professionalism seems highly inconsistent.

First off you have Americans Cropsy Maniac blasting through four tracks and six minutes of Carcass spawned deathgrind, starting off with some samples to their namesake slasher and then just bludgeoning you at high capacity with only a few hints at tossing in some background guitar melody or something that could actually make the tunes mildly more interesting. It doesn't quite work, and though I could say these guys are the most energetic on the split, they also gave me the least return. Belgium's Burial Ground, a group that has existed almost entirely on the demo/split level thus far, dishes up some crude but evil old school death metal that I thought was quite cool, almost like a mix of Autopsy's raw and grotesque punk-death form and the more structural Germans Morgoth on their earlier recordings. The riffs didn't always stick with me so well, but I can at least say I experienced some fond flashbacks for that late 80s/early 90s era, they had some curious quirks like a loud bass tone and even some narrative on their paean to "Last House on the Left". Fans of old Autopsy, Asphyx, and the like might wanna track them down, I believe they've got a compilation out that might have all their split material.

Even uglier is Kam Lee's Grave Wax, who have an even cruder and uglier style than anyone else on the split, and though Lee's vocal effects are cranked up to almost caricature level, these tunes were also quite fun, almost as if you were listening to them live but Lee was too high on the mixing board thanks to some zealous dweeb sound guy that wanted to fuck with the knobs. However, just like Burial Ground, these are actually fun, especially "Transmuting Techno-Terror". Ugly, inspired, no fucks given death metal. And bringing up the tail end of the recording are two tracks from Rogga Johansson's Severed Limbs, a decent project with a chunkier Swedish sound, although not just an emulation of Entombed or Dismember, but a more American style to the riffs, simply dowsed in that familiar production. These are two of the stronger cuts on the whole thing, and like his album Sores Galore that I reviewed earlier in the year, if you dig his other groups like Paganizer or Revolting you are likely gonna enjoy this stuff also. It's not a project he puts much importance in but certainly a worthy one.

In all honesty, I would have dug the Grave Wax, Burial Ground and Severed Limbs contributions as their own individual mCD/EP releases, or at least maybe just a 2-way split from the first two. Cropsy Maniac's inclusion here felt a bit stylistically disparate from the others beyond also belonging to the death metal genre in some way or form, you might have more fun checking out one of their own recordings; and the production across the bands lends to an uneven sort of experience, which I'm not terribly fond of on split recordings, but if you love all the piling on of the retro death metal these last decades then I think there are certainly enough highlights that it just squeaks by on the quality meter.

Posted by autothrall at 9:56 AM