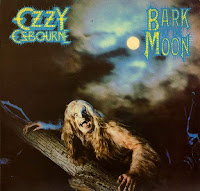 It's as much of a tradition for me to break out the first five Ozzy albums every Halloween season as it is to bust out my collection of King Diamond, Mercyful Fate, Deceased, Rob Zombie and other champions of the metal macabre. Not that Osbourne uses the horror genre as a particular focus in most of his lyrics, but clearly his feats of stage legend back in the prime of his solo career were focused around the shock-rock variety, and the cover art and aesthetics of a number of the songs clearly fit into the creepy category. Now, I'm a fan of the Randy Rhoads era just like the next guy. Like most of you, I thought he was a talent cut down well before his prime, and would have loved to hear what he could come up with through an extended career. But having said that, I've always been drawn more to the material Osbourne wrote with his next two guitarists, Jake E. Lee and Zakk Wylde, at least up until Zakk's debut on No Rest for the Wicked, which, perhaps heretically, is my favorite of his solo efforts. But if I were to hand out a silver medal it would be a tough choice between tidier, accessible The Ultimate Sin and this 1983 effort Bark at the Moon.

You really can't go wrong with any of his material during that 80s era, in which he firmly established that he'd be able to succeed outside of the Black Sabbath camp, bringing his familiar vocal style to a more contemporary set of metal and hard rock tracks which were arguably more arena-ready than his unshakeable alma mater. When I look at the lineup he had on this particular album, there was almost no chance I wasn't going to like it. Lee's six-stringing talent ranged from slick, explosive speed/heavy metal licks as in the title track or "Rock 'n' Roll Rebel" to the more caged, dramatic, bluesy feel he'd incorporate into a piece like "You're No Different" where he's almost playing second fiddle to Don Airey's keyboards. It doesn't hurt that Airey himself is a legend whose loaned out his talents to more memorable bands than you could count, or that Ozzy also had another rock god Tommy Aldridge on the drums, or Bob Daisley, formerly of fucking Rainbow (among others) on the bass. This record came armed and ready, and for my money, despite the tragedy of Rhoads' passing and the other troubles the band had gone through since the 1981 sophomore Diary of a Madman, it totally delivered on its promise.

The title track is probably in my top 3-5 of the Ozzy solo career, with ease, Lee's tasty playing leading the way for some of Osbourne's great verses. I mean once the Prince of Darkness cackles  after that first chorus, if you weren't into this well... Other highlights here included "You're No Different" with its woozy, epic pace and super 80s proggy key pads, or tunes like "Centre of Eternity" and "Rock 'n' Roll Rebel" which were just awesome as hell heavy metal for a 9 year old to experience on his dingy old record player. I absolutely LOVED Jake's tone, it was just such a  commanding and dominant force alongside Ozzy's voice, and you can clearly hear how it set up a lot of what Zakk would emulate a couple albums later, with the exciting, expressive squeals or flash put into every riff. "So Tired" is probably my least favorite cut on the disc, but even then it's definitely a catchy, dramatic big band style of ballad which channels Elton John or the Beatles and I can't say I ever feel I need to skip it when I'm playing through the album. And right after that he rights the ship immediately another cool pair of harder cuts, "Waiting for Darkness" a nice foreshadow for the sound on The Ultimate Sin.

Everything on this album sounds wonderful to me almost 40 years later, and I even appreciate some of the cheesier sounding synth lines which are unquestionably its most dated aspect. The lyrics are great, a few keyed in to the horror genre, but they were especially impressive to the younger me, and the cover photograph of the shaggy Ozz-wolf just perfectly captures this time and this content: we're going to be heavy, we're going to get dark, but we're going to have fun. And I did. And I'm still doing just that.

Posted by autothrall at 1:17 AM