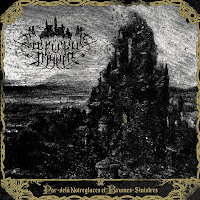 France has had a strong developing Medieval black metal undercurrent for several years now, perhaps not as popular or as its more avantgarde genre frontrunners like Deathspell Omega or Blut Aus Noir, but just as worthwhile to check out if you have any fancy for the atmospherics of earlier centuries, dark castles and idyllic landscapes. I've spoken on about groups like Aorlhac, Darkenhöld and Véhémence in the past, and now we've got the debut from an equally effective project called Crépuscule d'Hiver, which if my fading junior high knowledge of French isn't mistaken, translates to something like 'Winter Twilight'. A handful of you might be familiar with a dungeon synth act known as Gargoylium, and this is from the same individual, who carries over a lot of aesthetics from that and blends it rather seamlessly with his black metal influences to create an album I found just about perfect for this Autumn season and the Winter that awaits just beyond...
The aim here is create haunting, Romantic landscapes that evokes flashbacks to Gothic horror as well as the mid-90s European black metal that Stuurm no doubt listened to, and Par​-​delà noireglaces et brumes​-​sinistres is directly on target. Synthesizers are used to incorporate instrumental tones both Medieval and angelic, from brass and strings to organs and feminine choirs which are tastefully implemented to never drown out the darker visions being manifest through the beats, guitars and harsh raspy vocals. A lot of the more purely dungeon synth-like passages draw comparisons to the masters Summoning, but never to a degree of direct duplication, and where the flights of tremolo picked distorted passages and chords explode, they sound quite different than how the Austrian duo writes their own. Lots of melancholic harmonies and female vocals are mixed in to create this elegant sense of sadness and seduction, and the bass-lines churn wistfully below with just the right measure of thickness and groove. There's a good range of dynamic balance to most of the tracks, no endlessly cycling, dull repetitions but something fresh and new waiting around every corner of this antiquated, phantom-infested citadel that Stuurm conjures up in each of the lengthier tracks.
And let's face it, apart from the pair or shorter dungeon synth vignettes, these are some swollen tunes, ranging from about 8 and a half minutes to the 20+ minute title track. To the greatest credit of this album, I was never bored even for a moment: the musical arrangements perfectly mirror the excellent, spectral packaging of the CD and I felt as if I was lost for the full 70 minutes in this idealized nether-realm of cold stone, anguished spirits and elusive majesty. The riff-sets might not be perfectly unique in terms of this genre, but they felt as if they were trying something you simply don't hear on any newsprint necro record you encounter, and they're blissfully garbed in the more Gothic tones and instruments. For a group comprised of just one individual, I was extremely impressed, and while some listeners might find a couple flaws in the mix of the percussion or other nitpicks, the sum of Par​-​delà noireglaces et brumes​-​sinistres is nothing shy of magnificence that I'd readily recommend to anyone who enjoys either of the genres that birthed it.