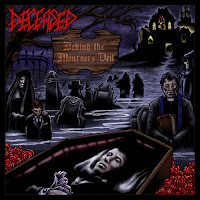 King Fowley and Deceased are no strangers to paying tribute to the influences that got them where they are, and on numerous occasions released entire albums with a considerable number of cover tunes. In fact, I wouldn't be surprised if, by this time, they had recorded more covers than origins...between Zombie Hymns (2002), Rotten to the Core (2004) and the most recent Rotten to the Core Part 2: The Nightmare Continues (2020). The earliest I had heard from them was probably the "Voivod" cover from The 13th Frightened Souls EP, and then this little EP Behind the Mourner's Veil which was cool as it mixed exclusive new tracks with a handful of covers from recognizable names like D.R.I., Tankard, and Anthrax, which wouldn't surprise anyone as sources of inspiration for the horror death/thrashers whose aesthetics have always been so mired in the rougher, filthier aggressive metal of the 80s.

The new tunes are ragers, although I can understand why the band felt they'd probably be better spent here than on one of the full-length records like Supernatural Addiction or As the Weird Travel On. "It's Alive" and "The Mausoleum" both contain many of the band's hallmarks, charging thrash/speed metal laden with traditional heavy metal melodies and an occasional foray into the faster elements of primordial death, in particular with King's vocals. They're well-developed headbanger tracks, not as righteously catchy as some of the material on the couple proper albums before them, but certainly enough to help tide one over for the next. More dynamic would be the 10 minute closer "Victims of the Masterplan" which is lyrically based on the West Memphis Three saga, and divided into a 4-part metallic narrative which for me had most of the best original riffs on the EP and a bit more of a dynamic spread than the openers. Especially I liked the moody breakdown with the samples which really kind of put this all into perspective, I mean that was a horrifying fucking situation for the victims and also for the accused, one that I don't think we've collectively shaken off as Americans. Child killings are traumatizing for me, but Deceased actually tackle this with an inquisitive respect, even at the risk of creating an unbalanced tone against the sillier originals and covers.

The covers themselves are decent, but a tune like Tankard's "Zombie Attack" is so great to begin with that it's difficult to live up to. King and crew make it even more murky sounding and throw on some more death metal growls, but otherwise play it fairly straightforward. "Reaganomics" is over in a flash of course so something like this pick is more to score a few points. On the other hand, I actually really dug their version of Anthrax' "Deathriders", in fact I might listen to it more than the original, this more aggressive style suits the riffing and lyrics well, although they still throw a few screams in there too. Same with their version of "New Age of Total Warfare" from British speed/thrashers Warfare, I'd probably reach for this before the original, it just sounds that awesome. All told though, you're getting almost a half-hour of material here, cool cover art, and really their best release while you waited it out in the 5-year stretch between Supernatural Addiction and As the Weird Travel On. Not as formidable as most of their full-length albums but some quality fan service nonetheless.