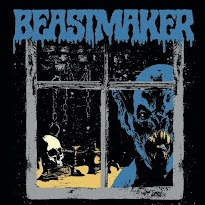 If you thought Trevor William Church's output with the heavy metal throwback Haunt has become prolific, you haven't experienced his purely doom metal outlet Beastmaker, which has released over a dozen EPs and several full-length efforts in the last half-decade. To his credit, while I've always gotten the impression that slowing down the level of productivity might result in more memorable recordings, nothing has ever felt lazy or mediocre. Most of the Beastmaker EPs, simply titled with the number of their chronological release, have been digital releases with a limited cassette run, but lately the band has taken to putting out compilations, generally merging two of these short format efforts into an album length, and Windows of Evil represents the first two such numbered EPs from 2018. Not necessarily their formative material, since the full-lengths Lusus Naturae and Inside the Skull predate this, as well as a few other recordings, but certainly a preview of what this EP series was about.

The style here is Sabbath-driven, chunky traditional power trio doom metal with the guitars bold and up front, and a strong emphasis on lead placement and building up a cool chorus. Not cool as in you're going to remember it 20 years later, but certainly a payoff to the verses leading up to it all. The songs are quite taut for the genre, generally no more than 3-3/12 minutes long, and for that reason they tend to lose a little of their potential power and structure. Not that I'm expecting ten minutes or more per track, but here you're only getting a few requisite riffs, usually just one to set up the chorus, and Beastmaker is good enough to earn more of our attention. Granted, that might have been the point of the constant barrage of 2018 EPs, to go with brevity and consistency, but it does give the music a bit of a 'doom assembly line' vibe to it which makes it little better than competent and passable. In their defense, the riffs on exhibit here do show enough variation that they don't end up sounding too samey apart from some of Church's vocal payloads.

I guess you could sort of imagine this as a St. Vitus or Pentagram with a more contemporary production, a real love letter to the niche without ever eclipsing its influences. Church has a decent voice, clearly inspired by the usual suspects like Ozzy but with far less of an interesting range or distinctive personality. He's good enough at what he does, but never reaches for the sky, and that's alright, because by and large Windows of Evil is a fun listen if you're the type that enjoys this traditional 70s-based doom metal template. The bass sounds voluminous, the drums are decent, the lyrics are one of the strongest components, samples are well used, and it's quite clear that Church and friends are inspired by all manner of cool horror films from classic black & white/Gothic horror flicks to eerie Italian giallos. In fact, the music does just as much of a service to those as it does to its inherent style. Again, this is restrained, almost like a pop mentality approach but within the doom metal parameters, but Beastmaker knows how to entertain you by reaching deep into your nostalgia and pulling out a few old ghosts, and the material off these two EPs is streamlined together into a consistent-sounding album.