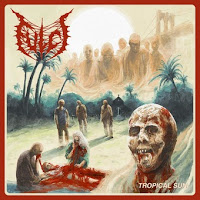 When you're taking on the mantle of one of the grand masters of Italian horror, and you yourselves ARE an Italian band, I think that shoots the expectations for your music through the roof. Thankfully, while they can hardly be deemed a unique voice among the death metal hordes, Fulci delivers on most fronts an entertaining sophomore effort which taps back into the birth-throes of the brutal death metal genre, when it was more about ugly, knuckle-dragging primitive aggression than technical flash and inhuman instrumental exercises. Not to say that Tropical Sun ignores all the little quirks of its medium that have arrived since the mid 90s, but this is definitely not some New Standard Elite or contemporary Unique Leader style of release, it sounds like it's directly influenced by earlier Cannibal Corpse and Suffocation with a couple add-ons like the occasional deeper pig-squeal variant on the vocals.

If it's not obvious, this album is based on the 1979 film Zombi 2, and the excellent cover artwork via Chris 'Misanthropic Art' Kiesling perfectly captures that feel, an island vibe with the old school rotters lurching about. Steady wins the race, steady feeds your face. I remember being freaked out by the film for any of its flaws, and really appreciated the atmosphere its setting created since it just felt so different than the Romero zombie flicks I was accustomed to. These days we've had stuff like the Dead Island video game franchise to honor it, and I'm positive it's been lauded by a number of other death metal or goregrind bands in the past, but to have it as a central theme is really cool and earns the record some extra flesh-stripes. The theme is really only present through the lyrics, samples and synth pieces like the intro "Voodoo Gore Ritual", but it dresses up the brutality just enough to create a more fulfilling type of experience than your average, insanely illustrated BDM effort, and the overall package just stands out.

Musically, this is pummeling, groove-reliant death metal which is almost wholly pit-ready, with a lot of evil little trill riffs and zipping leads redolent of the Cannibal Corpse era I hinted at above, the first four records with possibly a bit more Corpsegrinder to some of the vocal patterns than Barnes. Though the riff construction largely feels as if you've heard it before, they manage to string enough catchy chops together that you feel like your back in the early days of the style. Chugging, bludgeoning, and lumbering forward at a generally casual pace, with an occasional death/thrash or OSDM outbreak that reminds me again of that aforementioned act in their younger years. You'll get some sparse surprises like the eerie clean guitars they toss onto "Splatter Fatality", or a bleak yet melodic guitar harmony in something like "Legion of the Resurrected" which had me thinking of vintage Bolt Thrower, or some un-intrusive synths, but on the whole the style between the tracks doesn't deviate all that much from its crushing, confident formula.

Production here is quite clean, but still packs a lot of punch because of the guitar tone. The beats are programmed to be effective and workmanlike, but they don't try to bite off more than they can chew and just do their job. The bass has a good volume and adds a little chunkiness to the rich saturation on the rhythm guitars, while the vocals are all broad, burly and well mixed whether they're switching or matching up the growls and snarls or the borderline toilet bowl gutturals they use sparsely. None of the tracks ever wear out their welcomes, and although they don't really experiment that much, there's just enough variety provided as they trade off between more melodic chords and chugging. It's a fun album, it'll take you right back, the lyrics are solid, the packaging awesome. As I'm pretty sure these guys' debut was at least partly devoted to Lucio Fulci's "Gates of Hell" movies like City of the Living Dead, I actually hope these guys will continue the trend going forward. Can you imagine a cool death metal record based solely on The New York Ripper? The Cat in the Brain? Don't Torture a Duckling? Hell, they wouldn't even have to stick with Fulci, numerous other cult directors could be visited.