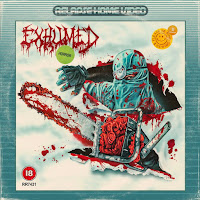 Much like its simplified, stripped down title, Horror sees a stripped down version of Exhumed which is reaching back to its earlier turn-of-the-century roots as a proper post-Carcass death grind. In fact, it almost one-ups their debut Gore Metal in how it so rapidly executes the stylistic decision. That's not to say that all of the band's recordings in the interim lacked these aesthetics, in fact they were always present to an extent, but the band had focused on a lot of thrashier, even more melodic elements, and frankly it often ended up with some pretty great songwriting. Now, to be fair, this is no record of absolutes, there are some mid-paced thrash breakouts, and the same entertaining and frantic lead guitars they have been spewing forth the last decade or so, but it's certainly one of their fastest if not the single fastest album of their career.

For death & grind diehards who probably dropped the band after Slaughtercult, or staunch fanatics for earlier Carcass, Napalm Death and Repulsion, this is probably a godse....goresend?! They're getting all of that primal energy, short tracks that almost all fall between the 1-2 minute duration, the mix of snarls and gory guttural vocals that the band has always championed in the Carcass tradition, and if they're also gore/horror fans, a very sweet retro artstyle on the cover which is nearly as cool looking as the last album Death Revenge. The chainsaw guitars and buzzing bass lines come fast and furious, the drumming is intense, and the core of the group's sound is all present. The energy is palpable, Exhumed show no signs whatsoever of slowing down or experimenting beyond what is expected of them, and the lyrical topics are a pretty stock selection of paeans to horror tropes like slashers and zombie flicks. Horror checks off almost all the boxes that it should, but if I'm being honest, as much of a fan of this band as I've become through the years, I found this one solid, but also lacking...not in kills, but in thrills beyond a few select riffs and leads.

To me, lot of grind music falls into the trap of constructing a string of average, derivative punk, thrash or death metal guitar riffs and accelerating them to the degree that their momentum alone can seem to obfuscate the fact that they're quite dull when dissected. The better albums of the genre are the ones that rise to this challenge and manage to offer a new spin, a new sound into the pummeling velocity. Take bands like Antigama, or some of the recent Napalm Death albums, as examples of how this can be kept fresh and alive; but for every one of those, there are scores of others which simply exist like an echo chamber of aggression. Granted, you could say this same thing about any other metal sub-genre, sure, but with grind and deathgrind it always stood out more, since the music was just so spastic and frenzied that I felt I should be more engaged. A lot of the tunes go in one ear and out the other, with the only reaction being 'that was fast' or 'that was angry'. A very temporal visceral response. Horror suffers from this to an extent, but it maintains just enough of Exhumed's charm, production standards and competence over its 15 tracks that 26 minutes that it gets a pass. But there's simply no way I'd break this out over Death Revenge, Necrocacy, Anatomy is Destiny, or their first two, Gore Metal and Slaughtercult, which already gave me what I'd want out of this one, only with better songs.