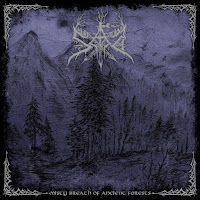 Sad is an unsung, relatively long-standing act in the Greek black metal community which might be dubbed as 'dependable', truly committed to the most fundamental aesthetics of their genre but never really manifesting anything truly impressive or unique, nor anything that really drags the bottom of the well. Albums like Devouring the Divine and A Curse in Disguise are textbook cases of the medium, with nasty rasped vocals and nihilistic energy that is derived from the European forebears and iconoclasts like Mayhem and Darkthrone. They don't have a terribly Hellenic feel or sound to them, although I'd say a few melodic parallels might be drawn towards the more sinister Rotting Christ or Varathron material.

Misty Breath of Ancient Forests is the duo's sixth proper full-length installment, and while it might be considered more of the same, I'd say this was easily the band's best produced record to date, and also cultivates a consistent melodic might to it that should sate purists. I was immediately taken in by the muted, murky artwork and just how well the musical content lives up to that. You're clearly thrust into the role of some corpse-painted barbarian scouring the ancient boreal landscapes of sound, wrestling with other predators to the unending glorious melodies that spew out of Ungod's strings. The vocals are standard for the genre, but definitely get crazy and suicidal enough sounding to compete with the incessant momentum of the music, and you might get a grunt to back up all the snarling. There can be a bit of a monotonous nature to the song structures...they cycle through a good number of riffs, and few that disappoint, but often the blast parts can grow a little weary, where if they had just thrown in an added break or simpler, slower transition a lot of this could come across far more sick and effective, especially when you're juggling 6-9 minute tracks.

Just listen to when they curb the speed a bit in "White Death" and you get those really great sounding melodies to the surging chords, or the saddening guitar strings that ring out over the roiling bass drums of "Hades Gazing". These aren't a huge deviation from the main thrust, but they hint that Sad could benefit from even more versatility in tempo and riff selection. But that's the only major gripe I can say about Misty Breath of Ancient Forests, because it sure as hell is well-assembled, and if you're a fan of classics like Transilvanian Forest which could also be pointed at for its too-persistent pacing, despite it being a masterpiece, then I don't think this one will bother you. A bit overlong, especially without some more breaks, segues, or varied tempos, but with ease this is one of Sad's better outings.

Posted by autothrall at 8:47 PM