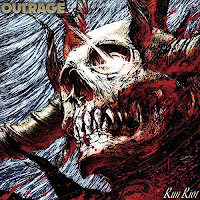 Outrage could safely be considered an institution of Japanese thrash metal, with almost 35 years of experience and recordings behind them, no massive gaps between releases, no sizeable breaks of any sort, very little if any deviation from their chosen path; yet they've gone virtually unnoticed in the rest of the world beyond the microscopic (but always increasing) niche of metalhead Japanophiles. Even then, this is not a band that fits into any of the major trends of their own country's metal scene writ large...they're not visual kei artists, they're not playing the blistering, trendy symphonic power metal nor are they a mashup of extreme groove metal and some idol group. I can recall a day when I'd read mention of them as a 'next Metallica', probably around their old albums like Black Clouds and Blind to Reality, back in some old metal or skater rag, but as with most such predictions and appraisals, it turns out only Metallica was the next Metallica...

That's fine, because Outrage is still pretty good, and Run Riot, their 14th full-length effort, doe just what its title advertises, a molten hybrid of thrash and speed metal aesthetics which doesn't sound like the band members have aged a day since that late 80s era. If you're looking for complex song structures or nuanced riffs, this is not exactly the band for you, but if you want simple, predictable, catchy energy drenched in wild lead guitars and charismatic barking thrash/hardcore vocals, that's all here. Noaki Hashimoto, who has fronted the band for most of its career, has a nice timbre which ranges from mid-ranged grit to a higher scream, and although his accent does naturally mold his delivery, the lyrics are hammered out clearly and don't delve into Engrish. He's often got some solid gang shouts backing him up and ultimately they get a broader selection of vocal weapons than you'd expect from the style. The guitars are a mesh of pure old blitzkrieg US thrash circa 80s Metallica, and bluesier speed/heavy metal which would make Lemmy and company blush; naturally this might create a split identity for the band, but somehow the strong studio mix and the vocals hold it all together into one unified, fist flailing brawl with cuts like "Cyclops" and the hilarious titled "Supernaturally Outlaw of the Cosmic Void" providing ear candy for anyone who likes their thrash metal straightforward and effective.

If they have any faults, it's only that they can occasionally get a little overly silly like "Science Spirit Hits" which is more like Butthole Surfers style rock & roll, but even that is catchy here, and I rather like how the effects on his vocals kind of evolve as he gets angrier, and it's some mean driving music either way. Surely there's nothing present on Run Riot that would surprise anyone that had heard the band's music before, only that the band hasn't had a wider reach. It's not like they do anything more crazy or special than other, comparable bands, but from front to back this is just a fun album with enough versatility that it never gets boring across the 44 minutes and change. I usually check out all the band's albums as they arrive, because I've always had a fondness for the veteran Japanese bands like this one, or Loudness, or Anthem, and I'd have to say this is one of the best they've come out since their first three. It's about as un-pretentious as it gets, and there aren't a lot of unique riffs that will stick out for long, but it's perfect for your Corvette cruises, or at least the dreams you have of having them.