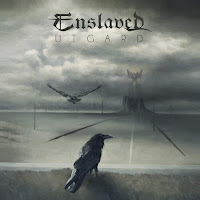 When I heard the first few singles for this latest Enslaved album, "Homebound" and "Jettegryta", I was suitably impressed, and thought immediately that drummer Iver Sandøy was a cool addition to the roster, bringing them yet another avenue for the soaring clean vocals they like to measure off against Grutle's snarling, or the other cleans contributed by both Vinje and Kjellson. But it wasn't until I watched them perform the new album in its entirety on one of their COVID-19 quarantine live-streams, that the hooks really started to sink into me; that I started to feel that hypnotic draw which their signature blend of progressive elements and Viking black metal has long manifest since the turn of the century when their style truly began to expand. This is truly one of the best of the business, an outfit which can seamlessly integrate disparate ideas, never truly compromise, and continue to garner the respect of both their audience and metal media.

That's not to say that Utgard is some crowning milestone of their career, because at its heart it's not one of their more interesting in terms of its quantities of nuance or creativity. To be clear, there are things here that you might not have exactly heard before, like some of the approach to proggy jamming, a few of the vocal configurations with these three throats, or some of the more exotic lead guitar passages, but you're still hearing a lot of the familiar aesthetics that defined their last 7-8 albums, like the spacious Pink Floyd sections, or the wintry black metal surges dominant on discs like Isa and Ruun. Utgard is very smoothly mixed and mastered, and surprisingly, while it doesn't lack for the complexity or inaccessibility of its compositional structure, it's somewhat more accessible on its surface level than other recent efforts like In Times or E. I don't think it's far-fetched to say that Utgard is playing it safe to some degree, but even an Enslaved sticking to its last decades' worth of sounds has a massive sandbox of riffs and combinations to play around, and tracks like the rollicking prog metal bite of "Sequence", with the ambiance of the other instruments layered over the verses; or the synthy Hawkwind-esque space rock of "Urjotun" are welcome and refreshing additions to the Norwegians' canon.

Performances across the album are spotless, and as usual its a technical feast of rhythmic variety, all manner of psychedelic rock integrations, but still fully aware of the band's own roots...and you can hear plenty of faster Frost-like executions as well as a number of thundering riffs that hearken straight back to the Viking black metal source of Bathory's Blood, Fire, Death. Certainly I heard individual riffs on this one which almost played out like a catalogue of references to their other albums..."Flight of Thought and Memory" might have belonged on Vertebrae, while "Homebound" channels a little RIITIIR or Axioma Ethica Odini. It might not be as stunning or revelatory as the first time you heard them delving into these styles, but the fact remains that eight of the nine tracks on this are extremely well crafted, the one exception being the 2-minute interlude 'title track" which is merely warped, windy psychedelic ambient noise with some throbbing bass, electronics and sexy spoken word. The lyrics are great, the cover art has a proggy sort of symmetry to it plus Hugin and Munin, and I've probably already given this a good half dozen listens during the month of October when I'm usually putting all my listening priority on horror metal stuff...what does that tell you?

Enslaved still rules. I'm not surprised, you're not surprised, and Utgard isn't surprising, but in hands as capable as these that becomes the diametric opposite of a flaw.