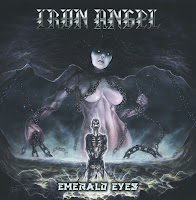 It's got to be difficult when you're responsible for a great cult record like 1985's Hellish Crossfire and then for over 30 years that same lightning just doesn't strike again. Granted, Germany's Iron Angel wasn't present for half of that time, but despite never putting out a bad full-length, they don't seem to have taken the metal world by storm the way that they had been poised to back in that fabled 80s era. Hellbound from a couple years ago showed a lot of promise, and I listened to that for a few months, but it was soon drowned out in the usual deluge of other bands putting their own stamp on the veterans' sounds, a pool that continues to spill ever outward as the younger generations of metal fanatics tap into those old veins and evade the glossier tech and bore-core of modernity.

Emerald Eyes is an attractive looking new album, and there is no question that the band's energy has not at all been sapped through all the years, with Dirk taking the helm over his younger cast of bandmates and unleashing an admirable and authentically-German sounding blend of power/thrash metal which is as loyal to Hellish Crossfire and Winds of War as you'd hope, but dialed up to current standards with a mix that sounds fresher but never artificial. I'd say the album sounds like a happy medium between Running Wild and Destruction; you've got a lot of those pounding, pumping heavy metal rhythms carrying a bunch of the tunes, and Dirk's voice actually reminds me a lot of Rolf Kasparek here, especially with the reverb that carries his bark out over the charging instruments and the airy backup vocals. And on the other hand, they slice up a few more clinical thrash riffs and toss them in there to keep it interesting and just a bit bloodier than you might expect. I was impressed by the sheer velocity of the track-list, I think this thing goes about six tracks before ever really slowing down, with tunes like "Sacred Slaughter", "Descend" and "What We're Living For" being some of my faves that they've written since the debut!

When it does finally reach that more measured pace, it's still a neck-strainer packed with riffs and charisma that will charm the leather off all the most die-hard 80s enthusiasts. Chances are, if you've got a wall full of records from the back catalogues of Noise, Roadracer and Steamhammer then this one is going to jerk upon the heartstrings or your nostalgia until you may require defibrillation. Good leads, solid drumming, a nice production that channels the age of its style, and a largely fast and furious selection of tracks that make me feel like I'm twelve old all over again, scrounging around with lunch and paper route money for whatever . No, Emerald Eyes doesn't contain a selection of timeless tracks that are likely to weather the next 35 years, but it's about as good as you'd expect for a reunion era band that never quite hit the level of the major German power metal or Big Four thrash acts, and I'd say this one overall nudges past Hellbound a little in quality, making it the best Iron Angel since "The Metallian" years. Iron Angel is STILL worth our time, ladies and gentlemen. Support!

Posted by autothrall at 1:21 PM