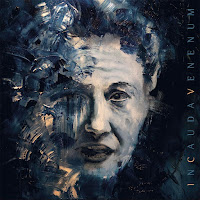 In Cauda Venenum is a French group that focuses heavily on creating swollen soundscapes which incorporate black metal, post-black leanings, and a cello into something sweeping and dramatic, with the intention that the listeners grow ever immersed and lost in its reveries of harsh but alluring sound. The last time I encountered them was their rendition of Angelo Badalamenti's Twin Peaks piece "Laura Palmer's Theme" which they put out on a 3-way split some years ago, but the structure to this new album G.O.H.E. much resembles their s/t debut from 2015, with two tracks clocking in at over 21 minutes length. This is a LOT of space to fill with something captivating, and while this sophomore does have a few moments of elevation, I'm not sure the bulk of the material really ekes out its existence in the most memorable of manners.

It's certainly a classy vibe with the chords thundering forth and the cello strings gliding above them, or the pianos, and they do a fantastic job of making that all feel so natural within the parameters of their style. Where I felt it fell behind was in the riffing selection...these all flow well enough, but they just never stick individually, so it's the sort of album which I could only appreciate on an atmospheric level. The drums do shift things up, and there are some nice segues here which balance off the instruments and seem to set up the next wall of sound for the post-black riffage, but the music never seems to climax quite enough with its choice in melodies, so it always seems like it's a swell of incidental music from some modern art film, just enough of a chord change to set a mood but without the visuals you'd see on a screen it doesn't really dazzle that much. The murky rasping vocals are executed well enough, and I believe they are sometimes doubled up which creates this creepy, fulfilling presence, but this also could have benefited from a stronger set of riffs below it.

The two tracks do have plenty of similarities, although the second, "Délivrance" centers more on a doomed, crawling gate and a slightly more interesting riff-set, plus a nice swerve into pure neo-classical terrain which I thought was one of the more heartening points on the whole record. Still, though, both sides feel heavily bloated; without the fascinating twists and turns required to create a compelling narrative structure, I felt like I was just listening to two halves of a very level plain, without any real secrets hidden upon it. Soothing occasionally on the surface level, but without the hypnotizing depths that I need to fix my attention. I dig the esoteric style, and there's nothing wrong with this as sheer mood music, but I'd love to hear them with a more engaging attack, perhaps more ferocity from the black metal influences and higher highlights of grace with the cello and melodies.