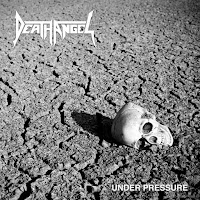 I have almost no interest whatsoever in acoustic recordings from metal bands. There, I said it. It's not that I harbor a particular disdain for the style; I can recall fiddling with a 12-string around a beach fire with some friends and having a blast. I don't mind the instrument being used for a shimmery or melancholic interlude, or an intro, or even being tastefully woven into some epic with the electric instruments, but I was never an Unplugged fan, and only once in awhile did I appreciate the nuance brought to a track when it's spun off into an acoustic version. Plug in and thrash my face off. When I saw there was a new Death Angel EP out, and they were covering the Queen/David Bowie hit "Under Pressure" as its center piece, I thought it'd be cool for a listen, but the prospect of four acoustic tunes, one of which is a new version of a song that was ALREADY an acoustic track (in part), the mercury was hardly busting out the head of my thermometer.

To be fair, the thrashers' acoustic rendition of the title track with the multiple vocals is enthusiastic, in no way something I'm going to ever steer towards over the original, but it's clear they put a lot of effort and emotion into it, and despite a little excess silliness balancing these vocals against Mercury and Bowie, it is the strongest tune of the four here. "Faded Remains", an original, is an attempt at a Death Angel country or folk cut that falls fairly short, it really just never hits that catchiness that it's striving for, and I found it a bit monotonous even with the solid backup harmonies and a decent performance from Mark Osegueda which if nothing else proves he's more than capable of handling the style. The new version of "A Room with a View" might sound fun sitting on the porch in the shade, watching the breeze stir the trees, but it never picks up with the 'oomph' of the original and thus doesn't exactly justify it's inclusion. Probably the greatest departure is "Revelation Song", being rendered down from its heavier version on Humanicide, and interestingly they keep it fairly aggressive, harsh and bluesy despite using the acoustic guitars, and I'd have to say this was the only other track besides "Under Pressure" that I thought was alright.

Ultimately, even as a fan who enjoys a number of the Death Angel records, I wasn't too thrilled by what Osequeda and Rob Cavestany put together here. It's pretty bland visually and aurally, though the execution of the guitars and vocals is adequate; it's not their first rodeo with these chiller vibes. I look at it this way: just a harmless, short filler release for themselves (and whatever fans might be interested), and it's better to get this idea out of the way and focus on keeping the thrash train on the tracks. In times like we're all having lately this sort of sentimental offering will surely reach some sympathetic ears, but I maintain that I simply don't think it's all that compelling a direction for this band to delve into much further. Not garbage by any means, but neither is it that inspiring. Let's break out those copies of that magnificent 1987 debut. "Voracious Souls", "Mistress of Pain", "Evil Priest". Where should you go from there? Channel those sinister teens within.

Posted by autothrall at 1:30 AM