Six Feet Under - Nightmares of the Decomposed (2020) 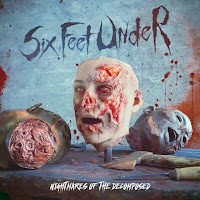 Like most of you folks, I heard the first (or one of the first) singles off this record, "Zodiac", and was immediately taken aback at how poorly Chris Barnes' vocals sounded, and over such a miserable selection of riffs that shouldn't have made it past the band's own quality control despite the wealth of mediocrity they've produced since the 90s and his split with Cannibal Corpse. Now, how it got past Brian Slagel is a mystery we might never have answered, I'd like to think he stares at himself in the mirror and repeats, over and over, like a mantra 'It was only for the money...just the money." When I got around to finally listening to Nightmares of the Decomposed in its entirety, I was somewhat relieved that not all the material was quite so pathetic, at least on the riffing front. The cover art is pretty cheesy, but in a fun way it almost reminds me of something Primus might have done 25-30 years ago if they had been writing death metal instead of alterna-funk.

I think the main issue with this 17th (unbelievable!) studio effort is that we're clearly experiencing the nadir of Chris's throat-ational ability. Not like I was ever truly impressed by it, I'm more of a George Corpsegrinder guy, but clearly his presence was a huge factor on the success of those early Cannibal Corpse records and bringing a lot of fans into the genre. Here his throat sounds like it's decayed, or maybe congested from smoking too much of the good stuff that he's always been vocal about. Whether you put some kind of filter on that or not, it's quite obvious this is the worst album he's ever recorded with that particular instrument, and a huge setback. Whether it's something he can bounce back from or not we'll see, it wouldn't be the first time Six Feet Under has surprised me, like that time in 2012 when they actually wrote a really fun album called Undead.  But even when he sounds the most 'normal' here, the vox are truly lacking behind even the laziest riff selections that populate tunes like "Zodiac" and "Death Will Follow" with their humdrum groove metal and chugging.

On the other hand, tracks like the opener "Amputator" have a springy, evil old school selection of rhythm guitars which, with a better vocal performance, might have been pretty juicy. Jack Owen and Ray Suhy manage to keep it together, and it's even got an exciting lead. "Blood of the Zombie", a track which relies heavy on its creepy muting patterns, is also passable, and "Self Imposed Death Sentence" and "Dead Girls Don't Scream" also have some potential, with a few points where his vocals are almost at their usual painstakingly average. Wherever this album gets slower and groovier, it gets extremely dull, almost like they couldn't spend 10 minutes writing these fucking songs and just laid out the first patterns that came into mind. There are also a few inconsistencies with the mix on some of the songs where some sound to me a little thinner than others, and it overall lacks a level of polish to to the mix which might have smoothed out the reaction. Overall, there might be 3-4 tunes here that, with better production and entirely different vocals, could have passed for a reasonable death metal EP.

But let's be frank: since the anomalous, uncharacteristic Undead, 6FU's trajectory has been steadily downward. It took a few records to stink just like the old days, but once they dropped that Unburied EP in 2018, which was just chaff from the Undead and Unborn sessions, you could kind of tell that they back to the same old string of garbage that defined the band from around 1997-2010. Nightmares of the Decomposed feels like they were rolling down this slope and then just plummeted off a steep decline, an album worthy of trash like Warpath, Bringer of Blood and TRVE Carnage, another nail in the coffin of one of the most unshakeable, overrated musicians this genre has ever known. I think Chris himself sums it up best with the lyrics to track #8, if you'd like to do some digging yourself.