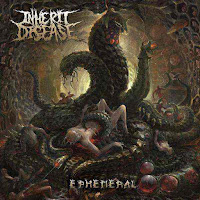 Signs your artwork might be better than your music: when you've got some sort of scaly, multi-headed slug-creature, or plural slug-things, with some human victim or patient that looks like its jacked into your squamous bio-matrix. Honestly I have no fucking idea what is going on with the cover of Ephemeral, but I know that it's awesome. That's not to say this third Inherit Disease full-length doesn't have other qualities to recommend it. In fact, if you enjoyed their fairly kickass sophomore Visceral Transcendence from 2010, you'll probably find plenty to like about this one as well. Hailing from that wave of Californian tech death acts that have been legion in the 21st century, these guys manage to scratch the itch you'd have for brutal, agile death metal in the vein of a Suffocation but without coming off too wanky or obnoxious.

This is just a rhythmic stew of bricklaying double bass, blasting, chugging and guttural fortitude which tries to lay claim to the suffocation and hopelessness of that cover artwork, and it does a pretty good job of placing you within a punishing labyrinth with absolutely no hope in sight. Sure, if broken down on a molecular level, the riff progressions from the Inherit Disease repertoire don't come across as very unique or distinct against such a wide landscape of similar acts, but they've got enough dynamic business going on at any one given time that I kept just on the edge of my seat. A palm mute might chug just one more time than I expect, or a blasted sequence might cut out into a roiling groove, or they might just squeeze in enough evil, clinical notes into that next tremolo picked segment that the brutal death maven which feasts upon my inner child perks up just enough to pay attention, which is always my worry when dealing with all these acts on labels like Unique Leader, Inherited Suffering, Pathologically Explicit, New Standard Elite, etc. Great at putting together products and expanding their rosters with acts that fit the bill, but sometimes a little too much.

Inherit Disease has a well-balanced attack, familiar but occasionally also offering up a little mystery about where they're going next, like in the closing track "Drone" and its dissonant, depressive note selection that pairs up well with the blasting intensity. The lyrics are a lot of fun to read through, and the production is fluid and clean without being too plastic or fake sounding. Definitely a band that should impress fans of groups like Deeds of Flesh, Severed Savior, Insidious Decrepancy, or other acts that have this comparable array of weaponry...who might not entirely shake off the shackles of their brutal tech/death niche and the facelessness it can create, but are clearly striving for something when they sit at the kit and amps to formulate their concepts. Ephemeral is maybe a fraction less appealing to me than its predecessor, but the band is no joke if you like those machine gun sounding muted riffs that whip up an uncaring, rapid, cold, otherworldly oblivion beneath the surface of all you hold warm and dear.

Posted by autothrall at 3:44 PM