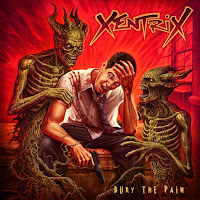 Xentrix was a competent if unexceptional British thrash band that, after two worthwhile albums and a goofy cover of the Ghostbusters theme, quickly fell victim to the 90s, when their subgenre dissolved in the face of grunge and death and black extremtiy. That's not to say that they gave up the fight, but the albums they produced after that were really generic and increasingly dumbed down without the catchier tracks like "Balance of Power" or "Questions" to guide them. Some 17 years after Scourge, they decided to get back together for real, and now we're seeing the fruits of that reunion in Bury the Pain, an album that is probably the best at capturing the style of the debut Shattered Existence and thrusting that into the 21st century with the expected louder and cleaner production values that will help modernize them with the current darlings of the era circa Warbringer, Evile, and their ilk.

There is no argument at all that this is about the purest thrash you're going to find, taking that heavy Bay Area/West Coast influence of the 80s and laying it out straight to the table. Choppy, propulsive riffs that all sound as if they've been paraphrased from the Testament backlog with a heavy helping of Master of Puppets. Solidly structured, with your normal verse/chorus builds but some decent riffs in the bridges, including a couple that have a slightly more clinical feel. The leads are all placed perfectly well but aren't terribly memorable, and the rhythm section here operates in perfect lockstep to provide what is on paper a flawless execution of the material. The biggest change to some might be the new vocalist/guitarist Jay Walsh, but to his credit he actually does a good job in emulating the original Chris Astley who has done various stings with the band. His timbre is slightly deeper, but possesses that same sort of grainy vibe, which also reminds me a hell of a lot of some of Steev Esquivel's stuff in Defiance, a band that is also quite a good comparison to Xentrix in general, as they were both sort of second stringers of the 80s thrash medium that had potential but very little originality...Aussies Mortal Sin also fell into this subset.

On a technical level I think this album is fine, but it does suffer a little bit from sounding uninspired, much like the modernized albums of their countrymen Onslaught. Bury the Pain is more melodic and catchy than some of that group's latest studio outings, but they both lack an element of personality which comes as a symptom of just how straightforward and structured they feel. Don't get me wrong, if you're just looking for an album that gives you the feel of a Shattered Existence, Face of Despair or Practice What You Preach, then Bury the Pain is more than serviceable. I think it's a far superior beast to either Kin or Scourge, but I think the album could really use some more blistering fast sequences or choruses that don't all feel the same. It just passes muster. It's almost like Xentrix is committing to be the best average thrash band they can be, and even if I found myself banging head to "The Red Mist Descends" or "Let the World Burn", they just didn't have the sorts of riff variety and qualities that will make them stand out to me long after. Now that they're back, and have successfully gotten back to the point that they were at in 1989, I'd like to hear a longer reach with more interesting songs that can reach outside the safety zone without sinking into the mediocrity of their post-1990 run.