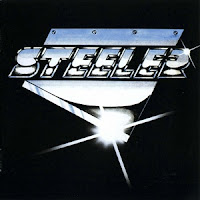 So there's this great guitar player from Germany named Axel Rudi Pell, and if you've been floating around the metal record bins for much of your life, you've likely encountered some of the works that have resulted from his solo band suspiciously titled Axel Rudi Pell. Love or hate those records, the guy has committed himself to a life of heavy metal music, never bucking for trends, with perhaps his biggest crime being the release of several 'ballad' albums, a practice that should be nuked until it glows and then shipped off to the nearest asteroid belt. Well, his later work being what it may, the real secret of Axel Rudi Pell, which is not much of a secret, is that he once fronted the German speed/heavy metal band Steeler, recording four albums in the 80s which grew progressively more crappy as the years rolled forth.

The album I present to you is the debut, Steeler, from 1984, which is a competent if unoriginal effort that should surely rock yours socks off whether you call yourself a fan of Saxon, Judas Priest, Accept, or the Scorpions. Almost every song here is as rollicking fun as you're going to find in some random German band, with the possible exception of the dour "Fallen Angel", the power ballad which closes the album without completely sucking. One of the best things about this album is the vocalist Peter Burtz (he also briefly sang in the pre-Rage band Avenger with Peavey Wagner). The guy's got such an everyman style to his voice that he might have just gotten off his truck at the pit stop, smoked a cigarette and he's trying to find a cold one. Or maybe he's been welding all day, his lungs seared by the particles of iron that must be forever bound to his soul. Other members on this album included Tom Eder on guitar, Volker Krawczak on the bass (he'd later play with Axel in his new band) and Jan Yildiral (who was also in Avenger).

Riff-wise, it's all Judas Priest meets Accept, perfectly suitable for banging your head or spiked leather gloves against any graffiti-covered wall as you pay the piper for drinking too much. When the band slows down you can hear a little Iommi in there, and there is a subtle melodic texture affixed to the riffing which would manifest itself more generously in Pell's later material. There aren't really any extremely catchy chorus parts on this album, which is the one regret. Part of this could be due to Burtz' honest but limited range, but regardless the riffs do rock and you will probably still enjoy yourself if you're a fan of the stuff coming out of this period.

The songs are all quite tight, but I can think of a few that stand out. "Sent from the Evil" creates an intensity through its on and off guitars that rock like a Kiss or AC/DC of the early 80s, with some nice little bass fills and a teensy guitar melody in the back half of the chorus. "Heavy Metal Century" is extremely Saxon-like to start, with an upperhand melody above the boogie of the rhythm guitar before the raw, old school power metal surge of the verse. "Long Way" has a blues bite that drives the primitive chugging, and "Call Her Princess" is just a rooftop-down, highway cruising convertible slice of bad ass at 65mph. Having a song called "Hydrophobia" might seem a little weird, but it kicks some ass ala early Dokken. As for the 'ballad' at the end, "Fallen Angel", you could do worse than the subdued heaviness to the guitars that slowly emerge from the placid opening sequence.

Steeler is not a perfect album, and in fact this is not a band I was ever truly impressed with, but as far as this 'dated' style of metal goes, it survives quite well. You just need to know what you're getting yourself into, because Burtz is no Rob Halford or Joe Elliot, and the band approaches the music with an honest swagger that mirrors the old jam band living next door, who annoy you on Saturday afternoons until the sweet smell of barbecue charcoal tears you away from it all. There are many hundreds of albums I would probably break out before this when in the mood for some classic metal, but it holds together enough that you could throw a few songs on an 80s German metal playlist and have a blast.