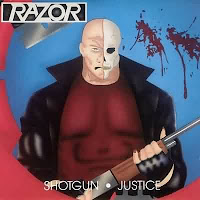 I was a huge fan of Razor's original vocalist Stace 'Sheepdog' McLaren, who fronted the band for the Armed and Dangerous EP and the five full-length albums which made up the prime of the band's career. From the dirty, candle melting speed metal of Executioner's Song to the more violent, late 80s thrashing of Violent Restitution, this had been the voice of Canada's premier chainsaw wielding metal band, and when I had learned that he would not be continuing on with the band into the next decade, I felt a little crushed inside. How could the band capture that wonderful atmosphere again, without Sheepdog's brutal intonations?

The answer is that they wouldn't, ever again. But damn it, they were going to try, and so they recruited a little known frontman Bob Reid and gave it another go. Shotgun Justice, the band's 6th album, is musically quite similar to Violent Restitution, though that album had been so god damned great that I must have been burnt out on the style by the time 1990 came about. Explosive, urban, violent thrash metal with lyrics both cheesy and relevant to the issues of Western Civilization in those years. Now, Reid may not have been the equal of McLaren, but he had a more torn sound to his throat which still matched well enough to the manic riffs of Dave Carlo, and if anything, Razor was sounding even more hostile. Just like its predecessor, Shotgun Justice is comprised of 14 tracks, most of which do not break the 3 minute mark and simply do not need to.

The band excels most when they're racing along with abandon, as in the opening track "Miami", which decries one of our 'beloved', filthy metropolises here in the States. The song is worthy of what that city needed in the 80s, if television stereotypes were anything to be believed...a haven of smugglers, drugs, and endless partying in the year-round heat of bodies and sun. I'll admit, the riffs here did not hook me as much as anything on Violent Restitution, and they in fact felt like a recycling. But it's not bad, and runs level with most of the faster fare on this album, like "Cranial Storm", "Stabbed in the Back", and "Violence Condoned". However, there are a few standouts like "Electric Torture", "United by Hatred" and "Concussion" which are of better quality, with riffing on the level of the previous release. And the slower songs like "Brass Knuckles" and "The Pugilist", almost all of which involve fist fighting, are suitably entertaining. Carlo still writes in the Bay Area vein, but set to hyperspeed, with as much thrust as he can spin into his palm, and some of the faster mutes between California and Germany. And since he's the star of the show (Reid's vocals are solid but rather monotonous), a certain level of manic aerobicism is needed to keep the listener violently thrashing his or her neck.

I didn't get much out of the album when it first released, thinking of it as Violent Restitution II: More Violent Than Before, But Not As Good. Nothing here can rival the classics like "Taste the Floor", "Enforcer", "Behind Bars", or the instrumental "Marshal Law". Bob Reid was an adequate replacement, with a suitably intense and disgusting register, but I can't help but wonder if Sheepdog's presence may have livened up the tunes here. At any rate, this album is at least superior to the ones that would follow, with some truly ripping rhythms and leads that feel worthy of the band's name. If you were into Violent Restitution, Malicious Intent or Custom Killing, this is more of the same. Whether or not that floats your boat is really up to the individual. I don't often find myself reaching for this above the older material, but I don't hold any negative feelings for it.