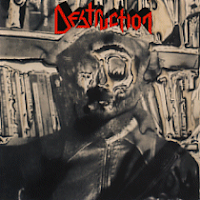 I realize that Destruction no longer considers their 1994-1999 period a part of their 'official' discography, but that neither excuses the band for their Schmier-less dreck nor does it suddenly wipe those recordings out of existence. Certainly not out of mind. Let's be honest here, if Metallica suddenly told the world that they were no longer counting Load, Re-Load or St. Anger as a part of their 'official' discography, would we all relent? No chance. Now, Destruction are certainly not on the same plane of popularity of Metallica, but the stain remains the same, and the 1994 s/t Destruction EP was the beginning of the 'end' for the band.

Now, I'm not going to claim that the material here is some 180 degree turn for the band, for while the songs suck fairly hard, they are clearly thrash metal. The problem is that, minus a few of the rhythms or leads, it is nowhere near the level of riffing quality that the band had created up to this point. Even Cracked Brain must seem like a masterpiece when compared to this EP, or the oft-maligned (with good reason) full-length The Least Successful Human Cannoball. There is an Americanized sound going on here, this EP being the first without Schmier to initiate their phase of awful. A certain dumbing down and 'groove' to the guitar riffs which only borders on the band's glory, and by far the worst part is the vocals of Thomas Rosenmerkel. He's got an edgy, grinding voice not completely out of the question for the band who had previously used Schmier...but he's always trying to inject 'soul' into his tones, and it sounds utterly retarded, like any number of horrid US thrash acts in the 80s and 90s to get absolutely nowhere because they lacked the foresight and aggression of better bands. It sounds a lot like a mix of Erik A.K. of Flotsam & Jetsam's lower register and a less meaty alternative to Phil Rind of Sacred Reich.

The flaws are not so prominent on the opening, bouncy barrage of "Decisions" which sounds like a bad attempt to merge Annihilator, Sacred Reich and Metallica. "I Kill Children" begins with some trilling, tappy guitars that are honestly pretty soothing until the choppy, weak thrash metal verse arrives, with this guy Rosenmerkel's fouling it up with their failed attempts at being expressive. But "Things of No Importance" is only too appropriate a title for the third track, which has the gall to tease you into thinking it might be half-decent before the psycho jungle funk starts jamming out on the verse. Wah wah, cheesy funky line, welcome to the fucking 90s folks, where we got shit bands like Ignorance or Infectious Grooves, and even the better funk metal efforts (like Mordred) were due for a fallout. Somehow it crept into the souls of our favorite Teutonic thrashers and no amount of forgetting that this EP exists in the band's 'official' discography will cover that up. The band tries to save the song near the close with some....interesting guitars around the lead, but then it dissolves back into stupidity. "Smile" opens with a xylophone and some whispered vocals, becoming a slappy bass thrash song fails on every level, as if the vocalist is trying to use a string of repetition to mimic all the heroes of the day (Korn, etc) in his own very special way. There's a hidden 5th track here too, if you're the sort of masochist that can't get enough of this trash...but there isn't much to it.

Destruction is the beginning of something ugly, and arguably it might even be worse than the following EP Them Not Me, which is tremendously tacky groove metal. There are a few seconds here or there of the Destruction you know, but what you don't know can't hurt you, and even coming after the first non-Schmier album Cracked Brain, which longtime fans of the band's 80s material often scoff upon (but I enjoyed, Andre Grieder's vocals did fit in pretty well with the band), this was quite a shock when I first heard it. Another band poisoned by the horrific decade of 'WE GOTTA ADAPT AND SURVIVE MA'AN' metal. If you find a copy, introduce it to the local incinerator. I'm sure the band would appreciate it...