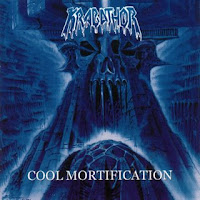 Cool Mortification is the 2nd full length effort from Czech butchers Krabathor, and a steady improvement over the debut Only Our Death is Welcome... Venturing further into the 'pure' death metal territory that had been laid out by bands like Death and Autopsy years prior, there is simply something to the compositions of this recording that make them endure more than the rest of the band's catalog. The album's not extremely technical, nor are there a load of brazen melodies or distinctions; but despite its blunt simplicity, the traces of thrash that remain and dark atmosphere of the recording combine for what deserves at least the status of a minor cult classic. It was hardly about to blow your mind if you'd been exposed to the Slowly We Rots, Mental Funerals, Scream Bloody Gores or Consuming Impulses of the world, but it's consistent throughout the 8 core pieces of the original album (I could give or take the industrial remix bonus track).

"Faces Under the Ice" opens with a morbidly thrashing rhythm, and you'll notice immediately that the band has undergone a slight change in the guitar tone. There was a single lineup change for this album, with 'Martin' joining Krystof on the guitar, replacing 'Hire' from the previous. Here the notes sound crisper, less bludgeoning than the last album, but the band has compensated with an increased bass presence, and you can finally hear Bruno plodding along with a cool distorted tone. This is a creepy track, especially when the broiling synth-line appears before the excellent melodic death/thrash bridge. "In the Blazing River" is also quite good, a rolling storm of muted melancholy that benefits greatly from the tight drumming, in particular the fills behind the opening riffs. At around 1:30 the song reaches a morbid, clinical thrash riff that kicks serious ass despite its understatedness. "Evil Corners of Mind" briefly resounds with a quitely screaming synth line and deep drums that transform into a choppy barrage of chords, and there's a disjointed groove to the verse which works well beneath Petr's gutturals and the squealing of the guitar lines. The bass gets a little wild in the bridge, and the solos are quite claustrophobic and evil. "The Loop" features an excellent intro section with synths brimming along clean guitars, compelling the listener through a very downtrodden, lush atmosphere before the meat of the guitars begins to squeeze its way through the grinder. Excellent fucking song!

"Without the Following Dawn" again dominates, thanks to the great bass haunting the resonant chords of the intro, and a riff that reminds me slightly of "Among the Living" from Anthrax. But it gets a lot more interesting, and sinister thanks to Bruno giving a four string freakout the likes of which simply didn't happen on the debut. "Forget the Gods" rivals the epic "Preparing Your End" from Only Our Death is Welcome..., but this time it's simply better, a slowly moving journey through almost glacial, choppy brutal death rhythms, with a lot of added reverb to the vocals that make them all the more tormenting. "Absence of Life" is another churning track, but the wailing, atmospheric leads of the bridge make up for what seems a fairly standard pace for the entire environment of Cool Mortification. The final track "Temporary Being of Insignificancy", an instrumental, begins with perhaps the most beautiful moment on any Krabathor album, a lush garden of synth sound that welcomes Bruno's popping, thudding momentum and a bleeding stream of guitar melody over a somber set of writhing, thrashing chords. Seriously, the song stole my breath away and I wondered if Krabathor would be capable of repeating such a graceful aesthetic in the future. The "Absence of Mind Mix" of "Absence of Life" hardly feels worth it, one of those early industrial death metal experiments that could barely give Fear Factory a run for their money, but to be fair, it's only a bonus track.

Cool Mortification is in my opinion the best album from Krabathor, and certainly the first I would reach for when in need of a Czech death fix. Armored by both nostalgia and atmosphere, it's a great album to spin when you're in need of those early years of wonderment within the genre, easily on par with a lot of the USDM coming out in the first half of the 90s. Brooding, hypnotic, and never in a rush to get anywhere, this is one you can soak up while you're down in your catacomb, performing diabolic experiments in science or just taking a lot drag off a fat joint. You may just want to stop the album before the remix.

Highlights: Faces Under the Ice, In the Blazing River, The Loop, Without the Following Dawn, Temporary Being of Insignificancy