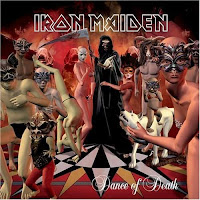 Brave New World brought a ray of hope back into the hearts of many an Iron Maiden fan, but three years later, the hysteria over the band's reunion would subside. The honeymoon was over. Could the band deliver another album of the same quality? Or would the creative curse the band suffered in the latter half of the 90s rear a head so ugly it makes Eddie himself cringe? Well, unlucky no. 13, Dance of Death sort of falls somewhere in the middle of the two possibilities. Like Brave New World, it's got an excellent production and a very bright, life affirming feel to the compositions, but at the same time, it's a little darker and certainly more mellow. The result is an album that, while not unpleasant to listen to, simply doesn't inspire or aspire to the heights of the band's older works. Ultimately, there are about 2-3 good songs and the rest feels like filler with reasonable intentions.

Now, mind you, despite the flaws, Dance of Death is not as miserable an album as the two the band put out with Blaze Bayley. There is plenty to be bored with here, but the album never hinges on any brand of audio torture that will have you questioning the existence of whatever God you pray to. The songs are somewhat busy, even if they don't often imprint themselves upon your memory. The lyrics are a lot like the previous album, a mixture of historically based musings and self-reflection, so it's unfortunately not a complete return to the subject matter of their 80s albums. But perhaps with age the band's fire for such pulp has died, and the band simply wants to say something more...poignant? I can't exactly fault the band for this, but the end result is that it's just not the same amount of fun...and that cannot be denied.

Dance of Death at least follows Brave New World's example of putting its best feet forward. In this case, most of the better songs occur very early on in the record, beginning with the count off to the mildly catchy "Wildest Dreams", which is an uplifting track in the vein of "The Wicker Man" but with more backing vocal melody to the chorus, which also features a swath of biting chords that mark the climax. The lead is fair, but the riff the band breaks into directly after that is an entirely generic sequence of notes that no band should be considering in the 21st century. "Rainmaker" is far better, and in truth one of the few tracks I actually still listen to on a normal basis. It's a pretty memorable rocker with a memorable impact to the verse and chorus, due not only to Dickinson's performance, but some nice, choppy melodic guitars that bust into solid, driving chords. "No More Lies", however, is 7+ minutes of mediocrity, from yet another of the band's soft spoken intro sequences up to the bland payoff of the chorus. About the only thing that stood out here were the post-chorus guitar melodies, which reminded me a little of Amorphis' "On Rich and Poor" sans the power.

The album returns to compelling, though, with "Montségur", one of several songs that take inspiration from historical battles, in particular the sack of the Cathar's final keep at the hands of the Catholic Albigensian Crusade in the 13th century. There is a nice, impulsive anger here delivered through the vocals and the careful intensity of the building guitars, and the two entwined through the chorus are probably the single most glorious point of the entire album. "Dance of Death" is another slow moving piece, over 8 minutes, which works best whenever the orchestra gets involved, but is otherwise quite dull, with nary a moment of memorable writing aside from the fact that the core band is 'not alone'. Dickinson does build up some aggression here, similar to the previous track. It's not entirely flaccid, but even then I am hard pressed to remember a note of it. "Gates of Tomorrow" has revisits one of those old, tremolo guitar riffs which make you feel that ZZ Top, Van Halen or Dire Straits are about to rock your socks off, and while I don't care for much aside from the chorus, at least that part is graceful enough to hang it by a thread above the mundane.

The rest of the album is where I generally draw blanks when I try to think back about it's strong points. "New Frontier" is aggressive and melodic, and in fact seems like the track here that I'd like the most on any given day, yet I just don't find any solace in the melodies or any desire to revisit it. "Paschendale" is another of the historic battle themes (God Dethroned also wrote an album about it a few years later), and it does build a little fire as the verse starts to rollick, with some well-timed symphonic swells, but so much of the 8:30 minutes could simply be clipped to get to the good bits, that it's a tough sell. "Face in the Sand" reminded me of "Blood Brothers" from the last album, but perhaps diving into a little more of a serious, atmospheric bridge. "Age of Innocence" has some nice, Bond-like digs in its surging melodies, and it was probably my favorite track on the latter half of the album, especially when it launches those insane melodies before 4:00, and "Journeyman" at least has that one catchy line in the verse, but again, I could have done without at least 2-3 minutes of the song. Not that there's anything wrong with a longer song, and Maiden have executed them successfully a number of times, but it seems for every memorable moment on this album there are 2-3 that just don't register.

From a technical standpoint, Dance of Death delivers yet another massive, wafting sound, as if you were witnessing the album live, in crystal clarity, and its melodies and tones were rising up to the rafters on the wings of skull-headed angels. There is a certain maturity and refinement to the songs that one might expect of any old metal or prog rock band of Maiden's status, but like so many of the band's peers (or even older rock bands that are still alive and kicking out hugely professional, big budget albums), the full body, the completeness of nearly 70 minutes of 'okay' material just doesn't add up to the primal vitality of their better years. I don't have a hate on for the album, because it's like picking cherries. The juices start flowing with anticipation in your mouth, but after a few bites...the romance is ended. But I'm sure there is some obsessive cherry lover out there who would disagree, and now I'll shut up.