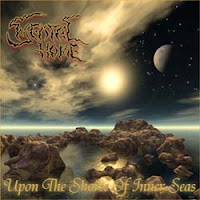 The first two Mental Home albums Vale and Black Art had the band primed and hovering at the edge of a breakthrough, especially considering the rather 'exotic' geography of their origins for their day. Russia was known for some mildly interesting heavy metal bands like Black Obelisk or Aria, but how many gothic doom bands were around at the turn of the century putting out records like this? The first Mental Home album to officially see its initial release through the quickly rising label The End Records saw its arrival a year after Black Art, but while technically a superior recording to either of its predecessors, it seemed the band had lost a little steam.

What went wrong? That's the quandary here, because there really is nothing truly negative to say about Upon the Shores of Inner Seas. It's not a long shot from the previous album, with the exception that it takes slightly more progressive flourishes. Sergey Dmitriev's vocals are more polished than before, and this honestly takes off a little of the emotion and edge, but to compensate he uses a slightly more nasal tone in some passages that quite reminded me of Snake from Voivod. The synths and guitars interact as well if not better than the earlier records, and the band has achieved a great tone here where they measure off one another, the melodies simply gleaming across the keyscapes created by Michael 'Maiden' Smirnoff. The problem would have to be the lack of truly memorable songwriting ala "Aevin's Cage", "Southern Calm Waters", or "The Plague Omen". This album has nothing so unforgettable, but it's otherwise a fairly even 37 minutes with only one 'stinker'.

"Downstairs" is a strong opener, with some guitar lines that seem lifted directly from the fog of inspiration that crafted Black Art, but though the song is dense and atmospheric throughout, I can't pick out a single riff that I truly care for. "Late to Revise" creates a shining moment or two that reflect the graceful cover imagery of the album, many of the synths the aural equivalent to a sun beginning to erupt over a cloud or moonscape, but once again it just doesn't quite make it over the top. "Eternal Moan" is the track I really didn't like here...it sounds like Snake singing over some sort of gothic metal swing band, cheesy keyboards trying unsuccessfully to create some uplifting melody behind the chorus. I feel like I'm engaging some sort of bizarre Russian-alien disco when I hear this track, where the two peoples meet to exchange genes, and when it transforms into slappy prog-funk around 2:10, I can feel my dinner attempting to exit an orifice other than the one I intended.

Sadly, the album never really picks up the pieces after this oddball shocker. At best, it only manages to level itself off with the first few tracks in a few spots, like the desperate melodic intro to "Bliss" or the glorious surges that accent the lazy, Voivod-with-a-keyboard atmosphere of "Breakdown". "Stained" is pretty boring, and the remake of "Amidst the Waves" from the band's Mirrorland EP, while superior to the original, is too little and too late to make up for the lackluster 30 minutes you've spend Upon the Shores of Inner Seas.

Perhaps the band knew they had hit a slump, or perhaps not. All I know is that we've seen a decade come and go with no further releases from the once promising Russian act. If this album is truly at fault, well, everyone makes a mistake once in a while. It's not that the material here completely sucks (aside from "Eternal Moan"), it's just short on inspiration. I'd urge Mental Home to forget all about this mediocrity, and head back into the more gloomy, culturally sharpened doom of the first two albums, writing songs both intense and majestic. At least one thing could be taken as a positive from Inner Seas: the production. With any luck, we haven't heard the last of them.