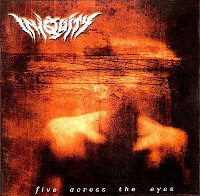 At first I didn't like this album's title much, and I still don't much care for it, but it is an accurate descriptor for what this album feels like. Getting slapped in the face. Denmark's now-defunct Iniquity will devour you, digest you, and shit you into the gutter. What we have is very fast, brutal technical death metal with groove elements, nicely interspersed within the length of the album. Think Hate Eternal, Nile, Decapitated, etc. with occasionally a bit of grooving goodness.
The album literally wastes no time with intros, immediately hammering you with a full on assault of sound. Track one "Inhale the Ghost" interplays discordant lead guitar struggling for purchase amongst the devastating rhythm section. Around 1:50 it slows into a trippy little segment, the first breakdown amongst some wonderful ones on the album. This piece has a faint trace of exoticism, almost Egyptian, though the (pretty awesome) lyrics are not reflective of that.
Abused, abusing, accused of using
Dealing, declining, fatally resigning
Push the needle, inhale the ghost
Crush the pill, increase the dose
Track two "Surgical Orb" does not fuck around, as a friend who listens exclusively to this kind of stuff would say: this shit is serious, man. The songwriting is once again solid, discussing a person operated upon by aliens as a shell for use of infiltrating the human race. Yes! Musically it backs up the concept one hundred percent.
Track eight "The Rigormortified Grip" is honestly one of the most absolutely killer songs I've heard in this genre, with some freakish guitar work and nearly supernatural ability on the drums. Honestly, even if you don't plan on buying the album for some reason, you at least owe it to yourself to listen to this song. The breakdown around 4 minutes that caps off the song is simply orgasmic, once again weaving in that ominous desert sound.
As if the repeated gushing has not given it away, I really enjoy this album. Find it and enjoy. It's a shame that the band split up, but at least they left us with this along with another good effort in 2002's Grime unlike some of those wonderful cock teasing one-and-done death metal bands. Demilich and Repugnant, I'm looking at you.
Verdict: Epic Win [9/10] (impossible tortured shapes in uncanny theatric vigor)
http://www.myspace.com/iniquitydk
Posted by JD at 7:14 PM

I actually like 'Grime' more than this album, but it's a pretty overlooked band.