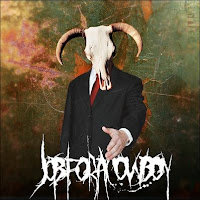 Judging by how long the hardcore and death metal fans here in the States have been crossing over in their concert going experiences, it's taken rather a long time for a plausible hybrid of the genres to arise. The process began in the 80s with 'crossover', fusing metal and punk music, and then moved along to the later strains of 'metalcore', some of which feel more legit than others (i.e., the caustic post-core noise induction of bands like Converge or Coalesce as opposed to the radio friendly Gothencore soul horseshit like All That Remains or Killswitch Engage). Naturally, it occurred to some bands that they'd rather fuse death metal in with their rampant breakdowns and mosh pit attitudes, since people have been moshing to that all along.

Since no emergent trend can survive without some good old sensationalism to run concurrent, people started calling this 'deathcore' (though the term had been coined long before by a band, and it's likely been around even further back). It's a mutant genre that many younger fans praise, and many of the 'true' metal fans absolutely despise. Whether this has to do with the inbred 'get off my lawn' xenophobia that certain metal heads are won to display whenever other people peek into their gloomy little world, or whether it's through an actual distaste for the music, who could know, and who cares. Deathcore has become the newly divisive bastard breed of metal music, and like any budding genre, there are good examples and bad examples. Arizona's Job for a Cowboy thrust out from almost nowhere into one of the foremost bands in the field, and almost overnight their internet buzz and live shows had set them ablaze in the eyes and ears of metalcore fans seeking out something heavier than the Ozzfest nu-metal garbage and screechy American melodeath they had festered on for years.

The question is...did this band deserve the attention? Well, if this debut EP is anything to judge by, then certainly not at first. Doom features 5 new compositions and an intro. The band wisely passing on a re-recording of anything form their 2004 demo, and suddenly, on the strength...or rather, lack of strength on this effort...they were everywhere. The style here is not a stretch from my previous description: all of the live setting benefits of Earth Crisis/Slayer breakdown-derived moshcore with an added injection of subtle tech death metal. That's what we go for in this country, it is sad but it is fact: brutality + technicality + dance-ability. Are we all fucking meatheads? That's an argument for another day.

We begin with a minute long ambient/noise intro "Catharsis for the Buried", complete with horrified samples, and promising enough that one feels he or she is about to step into either some militant terror industrial record or a guttural deathblast. Well, "Entombment of a Machine" gets that blast out of the way right quick before descending into the rolling double bass and fist on the floor, windmill-kicking mosh death that has every cool kid screaming doooooodddd siiiiccck. The band uses its neanderthal, bludgeoning low grooves to propel itself through several tempo shifts, but they always return to the huge stomping maneuver, for if to abandon it entirely would...well only make the song that much cooler. Make no mistake, there is some proper death metal in here, certainly the sort that would appeal to fans of the NYDM sect, but nothing truly sticks.

"Relinquished" is an improvement, with some solid old school death metal rhythms that actually sound far better alongside Jonny Davy's higher pitched gutturals and snagging pit-snarls. The song is still relying on its weaker elements though, namely the desire to mosh forward through cruise mode, with many a lop-sided, bouncing rhythm to break up what we really want to hear. And suddenly, once the track approaches 3:00, we are hit with this stunningly excellent death metal segment that actually evokes an atmosphere...whether it rolls or blasts on its journey. The winding guitar melody at the end is actually half-evil. "Knee Deep" churns along with a decent old school Swedish churn, but too quickly it devolves into more youth-weary fisticuffs. "The Rising Tide" follows suit. Every time I think it's about to get good, the band has to forsake the destruction for some awful breakdown, and "Suspended by the Throat" just alternates juvenile chugging with the occasional At the Gates/In Flames-influenced melodic barrage, probably the worst track on the album overall.

Honestly, if the band had condensed all of the worthwhile material on this EP to a mere two tracks, they'd have been onto something. But all of the good bits are mired in an obvious struggle for acceptance that translates into an almost entirely forgettable 24 minutes of slugger core that I wouldn't even beat my own head in with a bat to. A cliche pastiche of the many thousands of voiceless American metalcore bands that clogged up their local scenes and venues, now just spent youth. Ghosts of what could have been if they had focused on something other than emulating the early Victory Records roster and their favorite breakdowns from "Raining Blood" and "Slaughter of the Soul". Alas, babylon, alas.