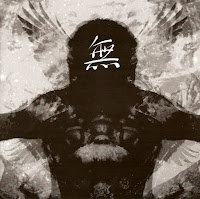 Like the drifter in the seminal Western films of decades past, Brown Jenkins have by this point come and gone through the annals of Americana. Death Obsession is the band's second full-length album (they've also released a pair of EPs), and released prior to the cessation of the project. As a newcomer to the sound of this band, with no experience listening to their older works, I feel as if I am late to an important discovery, bursting forth to take pictures and grill the archaeologists left on the scene while the better news crews have already taken it to press.

The reason for my excitement is that there are simply no other bands that I know of today who deliver quite the same sound as this morbid, Lovecraftian anomaly (the name of the band, though strange, is taken from The Dreams in the Witch-House). There are minor similarities to other American greats like Xasthur or Leviathan, but only in the band's devotion to raw, decrepit sounding guitars and the overall, oppressive atmosphere. The bass is thick and oozing, almost to a hypnotic level, and the guitars emit a blackish discord the likes of which would make Ved Buens Ende green with envy. I was occasionally reminded of Voivod, a less turbulent Portal, a more primal Mindrot, or perhaps a more frenetic, growling parallel to the more spacious sounds of earlier Neurosis, but these are mild comparisons at best. No, what Brown Jenkins has created is unarguably an original sound, that given time, will cement them into the scrolls of black and doom metal innovators, hopefully read by all.

Such an obscure sound as this is not easily absorbed without the proper mental environment. The tracks all tend to ramble forth through a number of level playing fields, where the guitars glisten and slowly tear free the listener's flesh, the bass remains central and intriguing as it creates a foundation of mood either flighty or haunting, and the drums crash along with intensity, but little in the way of fills or tempo shifting. You could correctly assume that Death Obsession is a monotonous album, but this is an acceptable price to pay for such a frightful immersion. It's one of those albums that can help you see into another world of possibility, not only in the dank corners of isolation but in the sunlit deception of a bright afternoon, the ebb and flow of society still a crushing, strangulating force that surrounds you.

You could also consider this much like an instrumental album, though there are vocals...caustic death-grunts that seem to disappear straight into the woven patterns of the guitar & bass. The album booklet contains lyrics, but not all of the written lyrics appear to end up within the songs. Instead, the listener is left to add them through his own peripheral imagination while the band rolls forward through 64 minutes of bliss and torment. And it doesn't hurt that the lyrics are quite good...certainly worth reading while you have the music playing in the background, when compared to many similar acts. Streams of conscious and unconscious horror read like poetry through the stark representation of the innocent scenery of decay:

All this is delivered in seven compositions which range from about 7-11 minutes in length. The album is one of the most consistent I've heard. The opener "Breathless" is just as devious as the final "We Disappear", and remains level all the way, but not like the cracked and dried earthen plates of a desert steppe, more like the slight rise and fall of a marsh or peat bog, sucking you down as you walk the line between each puddle of detritus. The vocals howl out at regular intervals, a piece of an ancient puzzle, but they can hardly distract you from the guitars and bass which truly carry the album (no synthesizers needed here to round out the band's sound, the guitars are just that convincing). To pick favorites here is nearly impossible, because the writing quality is staggeringly even, but if you can bear 10 minutes of this, you'd might as well sit down for the length of it, because Death Obsession is enormously engrossing and complex for an album so straightforward and seemingly primordial in its direction

Like most of the best cutting edge extremity, Brown Jenkins is not for everyone. It demands a lot more attention on the listener's behalf than most artists within the genres of doom and black metal. However, if you find yourself enamored of deep, depressive or post-black metal, or even the shoegazer sorts of bands (or anything I name dropped above), I can't recommend this effort enough. Death Obsession will take you by the hand, befriend and bewitch you, and at the same time walk you straight to the gates of oblivion. Perhaps I've been made a believer a little too late, but when I hear this album, I'm ready to walk that last, crooked path beyond the ephemeral pleasures of being, and into the gaping void of horror.