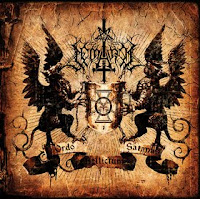 The term 'fun' is not something I would normally associate with black metal music, and I realize just the very notion of something being 'fun' would send all of the basement vampires back to their flocks of mold, self-loathing and decay, but I can think of no better adjective to describe the new, fourth full-length effort from the Ukraine's Semargl. Ordo Bellictum Satanas features a dozen new tracks, each of which begins with the word 'Credo', and ending with words like 'Revolution', 'Inner Evil', 'Total Krieg' and 'Possess', so you know the album is both a statement of lifestyle intentions and perhaps a little self-aware of its mockeries.

The music itself is not quite so raw or bombastic as the band's past efforts like Attack On God, and in fact it is highly refined, with clean, solid production values that rival the more popular acts out of Sweden or Norway. But the riffs are intense, well constructed from the band's myriad thrash and black metal influences with enough individual value that you'll be wondering if you've heard them before, and if not, that they're pretty brilliant. I can often hear a little Witchery here, or Slayer, or Venom, or even earlier Bathory, but the way the band uses tools like backing synthesized horns or seductive female backing vocals along the Rutarp's sneering makes for an entertaining album, more accessible than many fans of this field would be comfortable with, but kicking some ass regardless. There are also a wealth of guest musicians, including Vrangsinn (Carpathian Forest), Jonny Maudling (Bal-Sagoth, My Dying Bride), Nera (Darzamat), Novy (Behemoth, Vader, etc) and Iscariah of Immortal.

But despite all of the added perks to Semargl's production, it is the riffs which rule out the day on Ordo Bellictum Satanas. "Credo Sacrifice" is a tight opener with blazing rhythms and backing 'horns' that feel like a hybrid of Hollenthon and Horned Almighty. Complete with samples, and multi-layered snarl and growl vocals, you get a very broad, thrashing black sound here not unlike a modernized Bewitched. Other tracks which destroy due to the riffing are plenty: "Credo Possess", "Credo Bellictum Satanas", and "Credo Insanity" all rocked my socks off. But what's really strange about this band, is that they're not afraid to also throw in gothic metal elements and electronics...shifting between the two poles as if it was a natural thread of their fabric for all these years.

You can also hear this in the poppy electrics that introduce "Credo Revolution", with wailing female vocals and chugging riffs, almost as if the band were channeling Crematory or Theatre of Tragedy into a more sinister format. "Credo Total Krieg" begins with a groove bass line ala Tool and an industrial metal injection, while "Credo Flaming Rain" starts off like a total gothic metal song, female vocals and all, erupting into guitars and snarling. "Credo Dead To This World" also starts with an electronic beat, and "Credo Inner Evil" feels like straight up, catchy gothic/black metal.

I'm not sure what to think of every song here (I could really do without that opening to "Credo Flaming Rain"), but most of them are quite enjoyable, even with the infusion of modern, non-black metal elements that vary up the pace of the album quite a lot. If you've got a hate-on for big thrash rhythms, female guest vocals and electronics in your black metal, then I don't see much point in pursuing this. But approach Ordo Bellictum Satans with an open mind and you'll find a fairly diverse entity within Semargl that can entertain on a number of levels. Not as wild, nor as good as a band like Sigh, but headbanging did erupt throughout 5 or 6 of the tracks. And I would do business with them again.